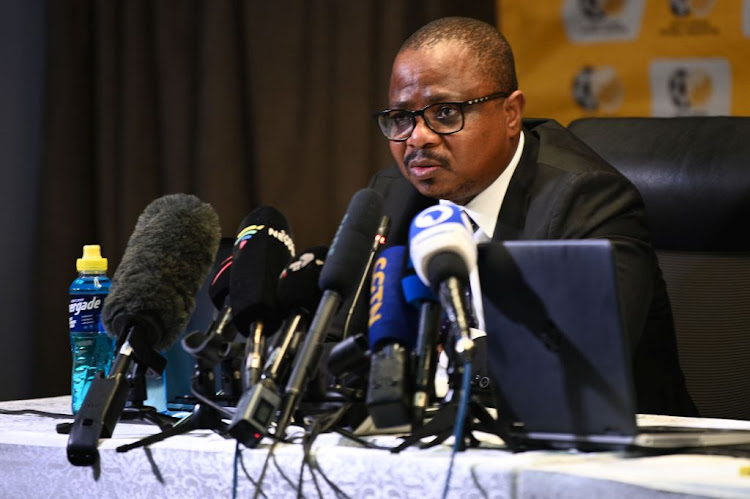 World football governing body Fifa has finally stepped into the heated dispute about Bafana Bafana's controversial elimination from the 2022 World Cup qualifiers and issued a deadline to Ghana to respond to the match-fixing allegations made by the SA Football Association (Safa) by November 20.

Incensed Safa officials have not minced their words in the past few days and said they suspected match manipulation and fixing after Bafana crashed out of the race to the global showpiece in Qatar under dubious circumstances after a controversy-riddled defeat to the Ghanaians in Cape Coast on Sunday night.

Senegalese referee Maguette Ndiaye and his colleagues are at the centre of the furious row as besides awarding a harsh penalty that ultimate won the match for Ghana, the officials made several other questionable calls that have prompted Safa to suspect there may have been match-fixing involved.

Tebogo Motlanthe confirmed to TimesLIVE on Wednesday night that they have finally received correspondence from Fifa and the matter could be resolved before the end of the month.

“Yes, Fifa has responded and things are going forward,” said Motlanthe. “Fifa are saying any further submissions on the matter from both Safa and Ghana must be made before November 20.

“And then on November 23 Fifa will convene a meeting of the disciplinary committee where they will consider the matter, and then finalise it. A decision will be made whether to take action against Ndiaye and his colleagues, and also whether the game will be replayed.”

The SA Football Association suspects Bafana Bafana's defeat to Ghana in a crunch 2022 World Cup qualifier on Sunday night may have been fixed, and ...
Sport
2 weeks ago

Ndiaye and his colleagues Samba Elhadji Malick (assistant one), Camara Djibril (assistant two) and Gueye Daouda (fourth referee) delivered one of the most shocking performances by a team of match officials ever seen in an international match to ensure Ghana beat Bafana 1-0 through a dubious penalty.

Safa took the fight directly to Ghana and Ndiaye's doorstep when they addressed the nation and the world on Wednesday, detailing how they suspected that the match may have been fixed. They insisted on the match being  replayed, and for action to be taken against Ndiaye and his colleagues.

“Furthermore, we wish to inform the South African Football Association as well as the Ghana Football Association that the above-mentioned protest will be submitted to a member of the Fifa disciplinary committee on 23 November 2021 for consideration and decision in accordance with article 14 (9) of the Regulations Fifa World Cup 2022TM, Preliminary Competition as well as articles 46 and 54 of the Fifa disciplinary code (FDC)," Fifa said.

“In view of the foregoing, the Ghana Football Association has the opportunity to provide the secretariat of the Fifa disciplinary committee with any comments it deems appropriate on the aforementioned protest, if any, by 20 November 2021 at the latest, along with any document deemed necessary. Finally, for the sake of clarity, please be informed that the disciplinary committee will decide on the protest using the file in its possession.”

Caf acknowledges receiving Safa's complaint about referee's conduct in Bafana game, but Fifa yet to respond

The SA Football Association's (Safa) complaint about the performance of Senegalese referee Maguette Ndiaye and his colleagues during Bafana Bafana's ...
Sport
2 weeks ago

Safa asked Fifa and Caf to deal with the matter urgently and for the match to be replayed in a neutral venue, not in Ghana.

Former Fifa referee Ace Ncobo was asked by Safa to compile an independent report on the match officials' conduct during the match and he was not impressed by what he saw after studying the visuals for hours.