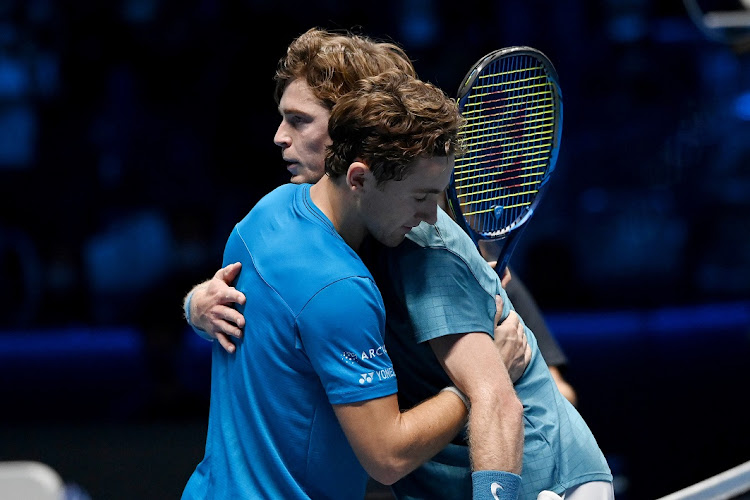 Casper Ruud of Norway embraces Andrey Rublev of Russia after winning their round robin match on Day 6 of the Nitto ATP World Tour Finals at Pala Alpitour in Turin, Italy on November 19 2021.
Image: Giampiero Sposito/Getty Images

Norway's Casper Ruud completed the semifinal line-up at the ATP Finals on Friday and will next face another Russian in holder Daniil Medvedev after a 2-6 7-5 7-6(5) win over Andrey Rublev.

The 22-year-old Ruud qualifies as runner-up from the Green Group behind Novak Djokovic who later posted his third round-robin win by thumping British alternate Cameron Norrie 6-2 6-1.

World number one Djokovic, bidding for a record-equalling sixth title at the year-ender, will take on Germany's Alexander Zverev in Saturday's second semifinal.

Making his tournament debut, Ruud bounced back from an opening defeat by Djokovic to overcome Britain's Norrie and then Rublev, and was relishing the prospect of meeting Medvedev.

“I'm enjoying the moment,” Ruud, who has enjoyed a stupendous year with five ATP titles, said.

“I'm looking forward to tomorrow. It's going to be another tough battle, a different kind of player from today, but one of the best in the world. He's proven himself as one of the best over the past two or three years.

“I've played against him a couple of times and lost both, but I know a little bit about what I'm going to face and it's going to be a fun challenge.”

Alexander Zverev booked his place in the last four of the ATP Finals where he will face world number one Novak Djokovic after a 6-2 6-4 win over ...
Sport
2 weeks ago

Friday's match was a straight shoot-out for a last-four place, with world number five Rublev the favourite having won his four previous matches against Ruud.

The Russian duly drew first blood, securing a double break early on and took the opening set comfortably by winning 92% of his first serve points.

Ruud, who came from a set down to beat Norrie on Wednesday, looked to be in trouble when he was broken early in the second but he began to throw caution to the wind.

Using his forehand to great effect he became braver and stepped into the court to break straight back.

That courage was rewarded with the second set as Ruud found a way to return Rublev's fearsome serve and give himself a chance of facing Medvedev.

The decider was almost a mirror of the previous set as Rublev broke at 3-2, only for Ruud to immediately draw level.

The set went to a suitably dramatic tiebreak with Rublev enjoying a fortunate net cord at 3-5 down. But Ruud was unruffled and duly completed the win with an ace.

Djokovic was already qualified for the semifinals but resisted any urge to throttle down as he dismantled Norrie with a clinical exhibition for the evening crowd.

The Serbian had never faced Norrie before and wasted little energy in sending the Briton packing.

Djokovic has dropped only 16 games in three matches here so far but will have a tougher time on Saturday against German Zverev, the player who ended his hopes of a Golden Slam with victory over the Serbian at the Tokyo Olympics.

“My tennis is getting better and better,” Djokovic, who has reached his 10th semifinal at the event, said on court.

“I couldn't be more satisfied ahead of possibly the two most important matches in the tournament.

“Sacha's serve is among the top three in the world and it will be tough with the fast conditions. Against him it's always a mental and physical battle.”