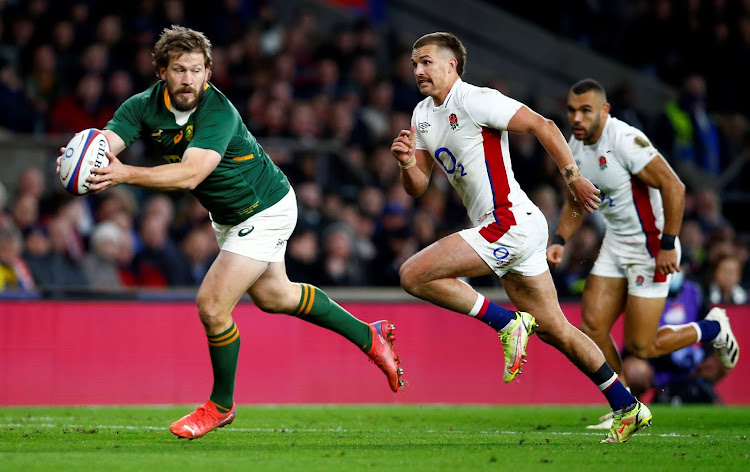 ON FORM: Frans Steyn of SA in action during the 2021 Castle Lager Outgoing Tour match against England at Twickenham Stadium in London on Saturday.
Image: (Photo by Steve Haag/Gallo Images)

The absence of banned tactical guru Rassie Erasmus had no effect on the Springboks when they crashed to a shattering last-minute 27-26 defeat against arch-rivals England, coach Jacques Nienaber said.

It was a galling loss that torpedoed the Boks’ hopes of securing a clean sweep of wins on their UK tour after earlier victories over Wales and Scotland.

Much of the talk surrounding the Boks in the lead-up to the Twickenham spectacle was World Rugby’s decision to ban Erasmus (SA’s director of rugby) from all matches for two months.

In the Boks’ previous game at Murrayfield, Erasmus had been a central figure, whipping up his team tactically and emotionally when he acted a water boy on the touchline when his team beat Scotland.

Rassie will be missed at Twickenham

Springbok captain Siya Kolisi has lamented the absence of director of rugby and occasional water carrier Rassie Erasmus from the team's clash with ...
Sport
1 week ago

Asked how big the Rassie issue had been for the Boks, Nienaber said: “No, we stay away from that and we simply had to focus on England.

“We knew it was going to be a big challenge for us.

“Our whole focus was on that so I can’t say that it had any effects.”

Outscored by three tries to one in front of an enthralled 82,000 Twickenham crowd, the Boks were left to rue missed opportunities after England flyhalf Marcus Smith nailed a last-gasp penalty.

“Conceding three tries is something that doesn’t sit well with us,” Nienaber said.

“It was very disappointing, especially in terms of how out of character it was for the team.

“We don’t normally concede from set pieces and it wasn’t something we weren’t prepped for.

“I thought in the first half they scored two tries which I felt we could have handled better, so it was out of character.

“They got into our 22m and they utilised the opportunities and built scoreboard pressure on us.

“We then did well to get back into the game and take the lead and then had it until the last minute.

“So the disappointing part was probably us conceding and having to work hard to get a foothold in the game again, and then not being able to finish it off at the end.

“Those were the turning points.

“Mistakes happen and, I said to the players, we will never judge a player on a mistake, they don’t do it on purpose.

Boks have much to mull but they have back up

They may have continued the habit of outscoring their opponents in the second half but the Springboks were left to rue their lack of decisiveness at ...
Sport
1 week ago

“All we can judge is the attitude that they go into the game with and show on the field, and the work rate on the field. Those are things that they can control.

“Sometimes you knock a ball or miss a tackle or miss a read and things like that happen, it’s something we will have to fix.

“But conceding three tries is something that doesn’t sit well with us. We are a team that concedes less than a try a game on average during the season.

“I don’t know where we are currently but it’s my department and something that we will have to look up and fix.

“This was a spanner in the engine and it would have been lovely to end the year with a win.

“That’s the third time this year that we have lost the game when we’ve been leading by one or two points at 78 minutes, so it’s very disappointing. It’s something that we’ll have to look at and improve on.”