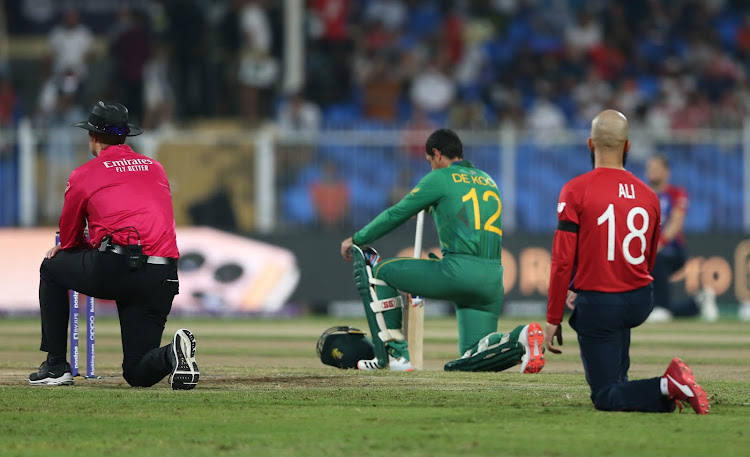 Taking the knee has now been accepted in principle by all the Proteas players and managers.
Image: REUTERS/ SATISH KUMAR

The Proteas will continue to take the knee as a team for the home international summer season and beyond, starting with the three-match ODI series against the Netherlands that starts at SuperSport Park in Centurion on Friday.

Proteas stand-in captain Keshav Maharaj faced the media on Tuesday after the team assembled for its first training session and said the team was yet to meet the board to get a directive.

The Cricket SA board met at the weekend and resolved that the gesture will continue as a collective for the forthcoming season, where a directive was to subsequently flow down to the team.

Stand-in Proteas captain Keshav Maharaj has emphasised the significance of winning the three-match ODI series against minnows the Netherlands, ...
Sport
1 week ago

The decision was taken at Saturday’s meeting between a board delegation led by chairperson Lawson Naidoo, all the national team captains, both the men and women's teams, and team managers, where the gesture to take the knee was taken as accepted as a principle.

The board sees the gesture as South Africa’s contribution to the global sports endeavours to demonstrate the country’s commitment to eradicating racism and all forms of discrimination.

Naidoo, after the board met team managers, said the decision to engage the players on the gesture of taking the knee was not taken lightly.

“We are delighted that we had the opportunity to engage with the captains and that this has now been accepted as a matter of principle,” said Naidoo. “The gesture is an important stance in articulating an unequivocal determination against discrimination in sports and in society, and one in which South African sportsmen and women should be taking the lead.”

During a tour of the West Indies in July before the limited-overs series, the Proteas team did not display a united stand on the gesture, with some players remaining on their feet with fists raised defiantly in the air, while three stood with their hands tucked behind their backs.

The confusing stand continued to the tours of Sri Lanka and Ireland, and during the opening match of their T20 World Cup against Australia.

That put South Africa, a country with endemic racism and oppression of black people under the dark days of apartheid rule, in a tailspin as the backlash poured in from the world media public.

Former Proteas assistant coach Enoch Nkwe could be back with Netherlands if Dutch coach Ryan Campbell’s wish is granted.
Sport
1 week ago

The embarrassing incident led to the board issuing an instruction to all members of the team to take the knee, a directive that came while they were on their way from Abu Dhabi to Dubai for the match.

SuperSport Park is the venue for the first and second ODIs while the third will be played at the Wanderers in Johannesburg.

The Proteas' 16-member team, without key regular players who have been rested, will kick-start South Africa’s home international summer ahead of the start of the blockbuster tour of India, which starts on December 17.