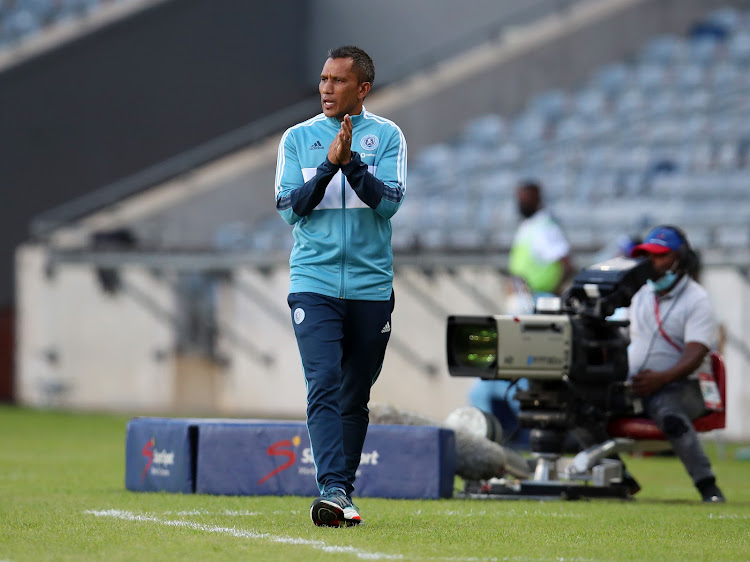 Fadlu Davids says Orlando Pirates deserve more than they got in the 13 Premiership they have played so far.
Image: Muzi Ntombela/BackpagePix

Orlando Pirates caretaker co-coach Fadlu Davids said he was happy for the players after the Buccaneers scored three unanswered goals in their demolition of Stellenbosch in a DStv Premiership match on Wednesday.

The 40-year-old Cape Town-born former striker said Pirates have been playing well and deserve more than the 18 points they have from 12 matches.

“It was important for the players because the performance has been good but not really getting the results we wanted and not scoring the goals that we wanted,” Davids said after Pirates went into the match on the back of of a single win in seven league games.

To say Kaizer Chiefs have blown hot and cold so far this season is illustrated by their lowly position in the standings where they are sitting in ...
Sport
3 weeks ago

Stellenbosch's defence looked suspect in all three goals as Pirates crushed Stellies 3-0, but Davids said his team was able to find the back of the net because they were on the money on the day, as Collins Makgaka and a Deon Hotto brace sealed maximum points at Danie Craven Stadium in the wine lands.

“In terms of our mindset we said that the harder you work the luckier you become.

“One thing was going to give and it was unfortunate that we could not get four goals but we are happy with the players. They have put in the hard work and finally got three goals.”

Ntsikelelo Nyazu played his second successive match since returning from a long-term injury and kept another clean sheet alongside young Nigerian centre-back partner Olisa Ndah, who was unlucky to have his goal disallowed.

Davids waxed lyrical on the abilities of the Nigerian defender who joined Pirates at the beginning of the season.

“Ndah is quite dominant in the air. I’m not sure what happened [with the disallowed goal] but it was just unfortunate for him in terms of scoring his first goal for Pirates. But it will come.

“He is a dominant force, not only in attacking set pieces but also defensively. He is really doing well with the partnership now with Nyauza.”

If Orlando Pirates’ inconsistency is anything to go by, May 2022 will mark exactly 10 barren years since they last won the Premiership title.
Sport
3 days ago

Pirates achilles heel has been their inconsistency, which has led them to just four wins, two defeats and a staggering seven draws in 13 matches.

“I am happy with the performance especially in the first 15 minutes of the game, which we normally do,” said Davids.

“We normally dominate the first 30 minutes of our matches but today the difference was that we were able to score during our dominant periods.

“So I’m really pleased about that, to be able to get the upper hand and be able to manage the game for the rest of both halves.”

The win will give the Pirates players a spring in their step as they travel to West Africa to face Liberia’s LPRC Oilers in the first leg of their Caf Confederation Cup playoff round in Paynesville, outside Monrovia, on Sunday.

Pirates will return home hopefully with a positive result and look to build momentum and further climb up the table when they host struggling Baroka at Orlando Stadium on Thursday December 2.