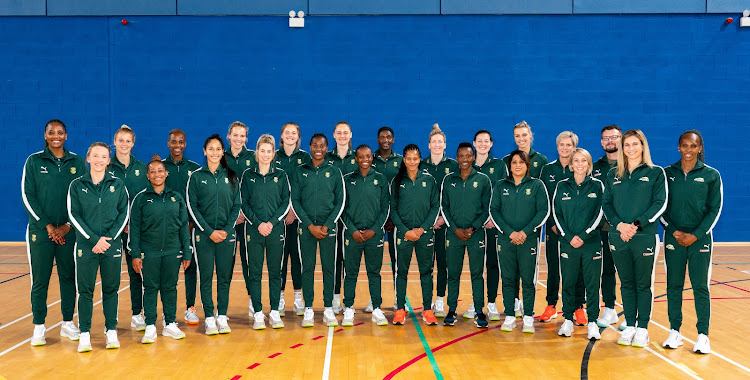 The Netball Proteas are ready for the Quad Series against hosts England, Australia and New Zealand.
Image: Netball South Africa

Playing in the Quad Series against hosts England, Australia and New Zealand will help to measure the progress of the players ahead of the Commonwealth Games, Netball Proteas coach Dorette Badenhorst says.

The Proteas take on top-ranked England, Australia and New Zealand between Saturday and Wednesday and Badenhorst is excited that the players will get time on the court against quality opposition.

In their first match SA will do battle against England’s Vitality Roses on Saturday afternoon.

“It is always great to play against some of the best teams in the world, this gives you a sense of where you are as a team,” Badenhorst said.

“I am delighted that we will get a chance to compete at this level especially after playing at the Africa Netball Championships and spending time in Ireland and Northern Ireland. We just need to do a bit of adjusting now and step up.”

Proteas Netball goalkeeper and defender Phumza Maweni wants to see more young players moving overseas to test themselves against some of the best ...
Sport
1 month ago

Proteas captain and the most-capped player in the team Bongiwe Msomi said SA are eager to make a mark on court while also giving opportunities to younger players.

“It is always an honour for anyone of us to take to the court and represent our country. We have a few young players in the team and some of us as the senior players need to make sure that we guide them and hold their hands in this series,” Msomi said.

The Proteas are set for a busy 2022 and where they will aim to play more friendly internationals against teams that will not be going to the Commonwealth Games in July.

“This is probably the last time we will be together before the Commonwealth Games. We will also be looking at getting some game time with teams that will not be playing in Commonwealth,” Badenhorst said.

“From our side, preparations are already under way and we just need to finalise an opponent for then.”

The Netball Proteas retained their fifth place in the latest World Netball rankings released in London.

There has been no change in the top five netball countries with Australia at the top followed by World Champions New Zealand, and Commonwealth Games champions England ranked third.

Jamaica and SA complete the top five and Uganda, who are a growing force in world netball, have moved to sixth place and Malawi dropped to seventh.