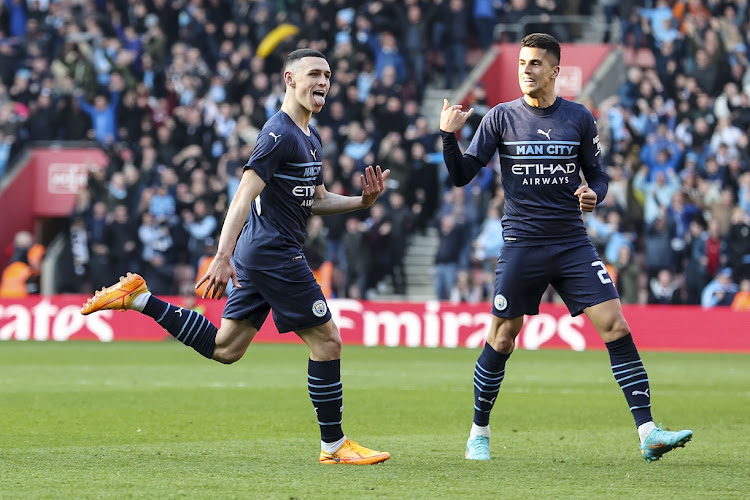 Phil Foden of Manchester City celebrates with teammate Joao Cancelo after he scores to make it 3-1 in the FA Cup quarterfinal against Southampton at St Mary's Stadium in Southampton on March 20 2022.
Image: Robin Jones/Getty Images

Manchester City produced a decisive late surge to crush Southampton 4-1 in the FA Cup quarterfinals on Sunday and stay in the hunt for a treble.

City took the lead in the 12th minute after Jack Stephens gave the ball away inside the box and Gabriel Jesus squared for Raheem Sterling, whose first-time effort took a deflection off Tino Livramento to beat goalkeeper Fraser Forster.

Southampton threatened throughout the first half and the pressure told just before half time, when Mohamed Elyounoussi's low cross was turned into his own net by City defender Aymeric Laporte.

The Premier League leaders went ahead again after 62 minutes when Jesus was brought down by Mohammed Salisu and Kevin de Bruyne's penalty crept under Forster's outstretched arm.

Substitute Phil Foden lashed home a thumping strike from the edge of the area 15 minutes from time and Riyad Mahrez completed the rout.

Lampard gets another shot at coaching, but Everton won't make for easy return

Having waited almost a year for another shot at top-level management Frank Lampard has been tasked with as tough a challenge as it gets: resurrecting ...
Sport
4 months ago