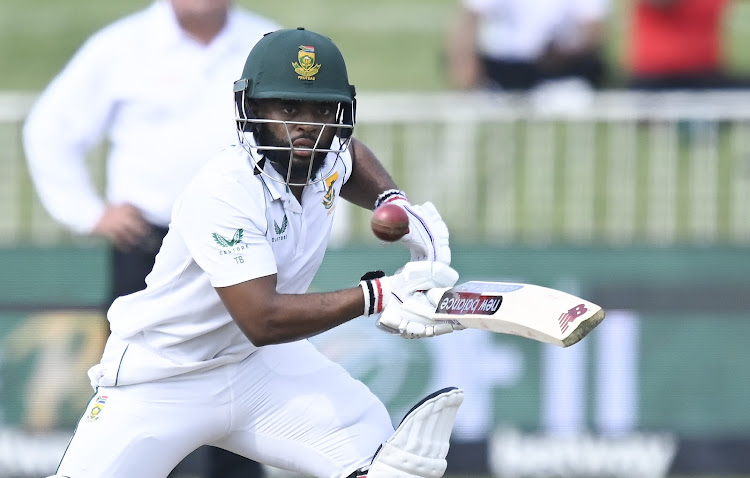 Half-centuries by Dean Elgar, Keegan Petersen, and Temba Bavuma have put the Proteas in a commanding position on day one of the second Betway Test against Bangladesh in Gqeberha on Friday.

Winning the toss and opting to make first use of the St George’s Park pitch, the Proteas named an unchanged XI for the series decider with Bangladesh making two changes, Tamim Iqbal and Taijul Islam replacing Shadnam Islam and Taskin Ahmed.

Openers Dean Elgar and Sarel Erwee got the Proteas off to a swift start, scoring 52 for the first wicket before Erwee, chasing a fuller delivery, was caught behind by a diving Litton Das off the bowling of Khaled Ahmed for 24.

Bangladesh must toughen up, Elgar says

Proteas captain Dean Elgar urged Bangladesh to toughen up and focus on the game as the battle lines were drawn ahead of the start of the second Test ...
Sport
2 months ago

The loss of his opening partner did not deter Elgar, as he continued to score freely at one end while Keegan Petersen found his feet at the other end.

The left-right combination kept the pressure on the visitors' bowling attack, bringing up 50 for the second wicket as the home side moved past 100 as Elgar chalked up his third half-century of the series as they went to lunch on 107 for one after 28 overs.

The Proteas test captain added 11 runs to his post-lunch score before spinner Taijul Islam was rewarded, finding a feint edge through to Das to send Elgar packing for 70 off 89 including 10 boundaries.

Petersen continued after lunch on 24 and struck three boundaries in the 34th over to bring up his fourth Test fifty.

Bavuma struck a boundary in the 37th over to take the home side past 150 before rain briefly halted play at 1:30 pm.

The unexpected showers were short-lived, with play resuming half an hour later.

Bavuma brought up the 50 run stand for the third wicket with a boundary when, Petersen danced down the wicket to Taijul, missing the ball which crashed into his pads.

Hosts South Africa will look to impose another trial by spin on seething tourists Bangladesh in the second and final test starting at St George's ...
News
2 months ago

He was initially given not out after an LBW appeal by the bowler, however, the decision was reviewed and overturned as Hawkeye showed the ball going on to hit the stumps, sending Peterson back to the dugout for a well-played 64 off 124.

The home side went to tea on 199 for 3, with Bavuma and Ryan Rickelton at the crease.

Resuming the final session, Bavuma struck two boundaries to bring up his second half-century in the series.

The Proteas moved past 250 with another Bavuma boundary as the partnership between him and Rickelton grew in stature.

The visitors made some late inroads into the Proteas batting lineup, first, breaking the 83 run stand when Rickelton (42) was caught in the slip cordon after the original decision was reviewed and Taijul claimed his third wicket off the innings, removing Bavuma for a well-played 67.