Proteas in control of the second Test against Bangladesh in Gqeberha 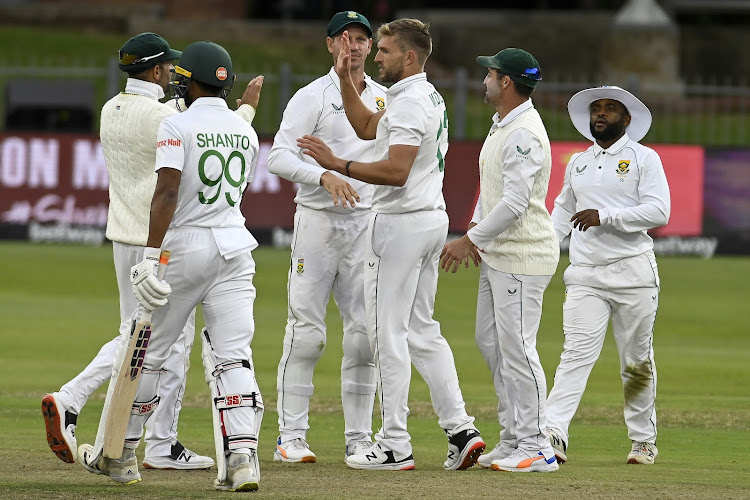 Proteas Wiaan Mulder celebrate after he got a wicket during the 2nd Test match against Bangladesh at St Georges Park in Gqeberha.
Image: Deryck Foster/BackpagePix

Keshav Maharaj top scored in the Proteas first innings when he chalked up a Test best score of 84 runs to help his side reach 453 on day two of the second Test against Bangladesh at St George’s Park on Saturday.

In pursuit of the 453-run first innings deficit, Bangladesh lost opener Mahmudul Hasan Joy for a two-ball duck off Duanne Olivier, before Tamim Iqbal (47 off 58), Najmul Hossain Shanto (33 off 74) and Mominul Haque (6 off 24) fell victim to a fierce spell of bowling by Wiaan Mulder.

Olivier picked up his second wicket later on in the day when he uprooted the middle stump of wicketkeeper batsman Litton Das for 11 off 14.

Proteas captain Dean Elgar won the toss and opted to bat in the series' deciding and second Test match against Bangladesh at St George’s Park on ...
Sport
2 months ago

Resuming on 384/7, Maharaj climbed into the Bangladesh attack, hitting four boundaries after lunch to become the highest scorer of the first innings, hitting nine boundaries and three maximums in his 95-ball stay at the crease.

Maharaj looked on track for a century when Taijul bowled him to complete his five-for.

Harmer (29 off 59) and Lizaad Williams (13 off 39) took the home side past 450 with a 35 run partnership before Taijul and Mehidy cleaned up the tail, removing Harmer and Duanne Olivier (0 off 4), as the call to tea brought a premature end to the second session.

Taking his 150th Test wicket, Taijul finished with 6 for 135, while Khaled Ahmed claimed three for 100 alongside Mehidy’s one for 85.

Earlier, the Proteas went to lunch on 384 for 7 on day two after a productive morning session after resuming on 278/5.

The visitors, buoyed by two late wickets on Friday, kept things tight in the opening exchanges, conceding just three runs by Mulder in the first two overs of the day.

Verreynne then struck two boundaries and Mulder a third in overs 93 and 94 to get things going for the home side.

Rickleton can stake Proteas claim after good showing in Gqeberha

Proteas batsman Ryan Rickelton aims to use the second Test against Bangladesh at St George’s Park in Gqeberha to cement a spot for himself in the ...
Sport
2 months ago

An altercation between Verreynne and Khaled in the 96th over saw the bowler throw the ball in the direction of the stumps, hitting Verreynne on the hand, which led to an exchange of words between the two which was quickly nipped in the bud by umpire Marais Erasmus.

The ginger-haired right hander responded by smashing the Khaled delivery to the boundary to take the Proteas past 300.

The right arm quick got his revenge when a delivery snuck through Verreynne’s defences, castling into the middle stump and dismissing the wicketkeeper batsman for 22 off 48 a few balls later.

Maharaj hit two boundaries in the 99th over to get his innings going and then welcomed Taijul Islam into the attack with two massive sixes and a four in consecutive overs.

Emotional Maharaj revels in sparkling performance in front of his family

At the end of it all, the emotions that come with a match-winning performance at his home ground and in front of his family got the better of Proteas ...
Sport
2 months ago

Mulder’s boundary off the same bowler took them to 350 in the 106th over and also brought up the 50-run partnership off 56 balls.

Maharaj hit a maximum which brought up his fourth Test half-century, the fourth of a run-laden first innings as Mulder, who scored 33 before he was dismissed by Taijul.