Ncikazi wishes Pirates’ Mako well: ‘We could have lost him but God saved him’ 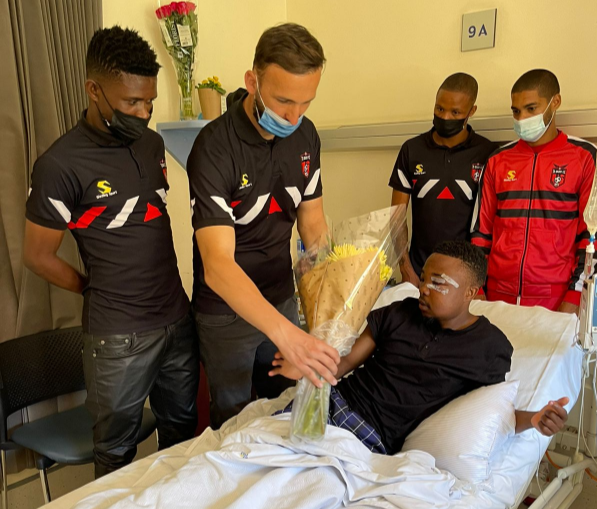 Orlando Pirates co-coach Mandla Ncikazi has thanked players and coaches from other clubs who visited Paseka Mako in hospital after the left-back’s scary head injury during the Premiership match against Baroka in Polokwane last week.

Some who were at Peter Mokaba stadium to watch the goalless match, including coaches and players from both sides, and fans who watched on their TVs at home, were reduced to tears and fearing for the worst as Mako suffered a horror clash in his hometown.

The 28-year-old Mako was left unconscious after a collision with the knee of Pirates goalkeeper Richard Ofori in the last minute of the match and taken off the pitch by ambulance, and then to hospital.

“We could have lost him but God being good to us he was saved. He is still in hospital for further checks,” Ncikazi said from Tanzania after Pirates lost 1-0 in Sunday's first leg of their Caf Confederation Cup quarterfinal clash against Simba SC in Dar es Salaam.

“Even other teams in the PSL and players visited him in hospital — that was a good gesture of the sport we have in our country.”

Pirates gave an update a day after Mako’s hospitalisation and said the player was in a stable condition.

The club said doctors revealed that the CAT scan results did not show any signs of a skull fracture or any brain haemorrhage but Mako sustained fractures to his face and nose, Pirates said.

This morning coach Sead Ramovic took some of his troops and visited @orlandopirates left-back Paseka Mako at the hospital.

We may be opponents during the 90 minutes but we are brothers for life. The entire @TSGALAXYFC Family wishes you a speedy recovery. pic.twitter.com/p8ZP5TQRgp

Mako, who would have had family and childhood friends from nearby his home in Zebediela watching in the stadium, has received well wishes from the football community countrywide. The player was visited in hospital by TS Galaxy coach Sead Ramović, his fellow coaching staff and players on Good Friday.

Pirates are preparing for Sunday’s second leg Caf Confederation Cup quarterfinal clash against Simba, who will arrive in Johannesburg on Saturday fancying their chances to progress to the semifinals having denied Ncikazi’s team a crucial away goal.

Ncikazi said Pirates will need to improve the number of shots at goal in the second leg.

“When we went wide we never passed into the box and made an effort to create a good goal scoring opportunity but we still have an opportunity in our home country.”

WATCH | Ncikazi explodes, tells Simba and journalists to be ashamed after Pirates defeat

Coach Mandla Ncikazi took a swipe at Orlando Pirates' Tanzanian hosts and club Simba, saying his team were treated “like animals” in Dar es Salaam as ...
Sport
1 month ago