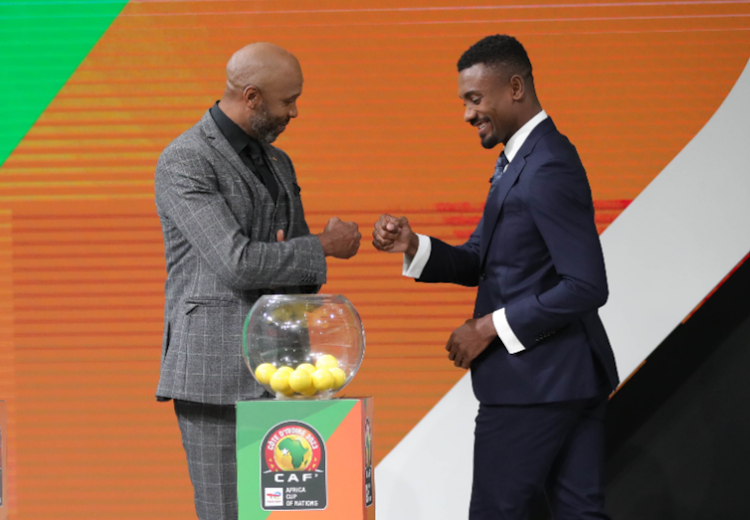 Former Ivory Coast striker Salomon Kalou (R), who won the 2015 Afcon title, greets former SA captain and member of the 1996 winning sqaud Lucas Radebe (L) during the draw at SuperSport studios in Randburg in the north of Johannesburg on April 19 2022.
Image: @CAF_Online/Twitter

SA is too big a football country to eat from the crumbs, and Bafana Bafana need to regain their flair and identity if they are to return to the top table of African football.

These were the views of Ivorian former African champion and Chelsea star Salomon Kalou after the draw for the 2023 Africa Cup of Nations (Afcon) qualifying group stages in Randburg, Gauteng on Tuesday night.

Bafana were drawn in Group K with Morocco, Zimbabwe and Liberia.

“Bafana Bafana need to qualify because the most difficult thing is qualification. Once you have qualified everything is open and you have a chance,” said 36-year-old striker Kalou, winner of the Afcon in 2015.

“SA is such a big football country and I think the Bafana need to come back to a level where they belong. This qualifying campaign must take them there.”

Kalou, who was a budding 11-year-old footballer when SA won their only Afcon title on home soil in 1996, said Bafana need to regain their identity as they no longer play with their traditional flair that caught his eye as a boy.

“They need to go back to what they used to do. The fun football. I mean the identity of Bafana when we were growing up, they were playing entertaining football,” said the striker who won the Premier League, Uefa Champions League, four FA Cups and the League Cup with Chelsea.

“They had Doctor Khumalo, Lucas Radebe, Mark Fish and others, players who used to entertain us on the pitch. I think once you lose your identity it is difficult to find your balance.

“Maybe the way is they need to come back to the way they know they can play and the way they used to play. Maybe that will help the country and SA football move forward.”

5 cities are ready to host the competition 🌍 #TotalEnergiesAfCONQ2023 pic.twitter.com/YOxXBHXAqE

Bafana no longer have a seat at the head table of African football and their decline as a powerhouse is perfectly illustrated in their record in Africa’s holy grail, the Nations Cup.

From the glory days of 1996 when they won the tournament in their first appearance, Bafana’s fall from grace was allowed to creep and has spectacularly grown out of hand.

After 1996, Bafana finished as runners-up in 1998 and third in 2000. From then the team only reached quarterfinals twice — in 2013 as hosts and in 2019 in Egypt — between failures to qualify for many Afcons, as was the case with this year's finals in Cameroon.

Hosts Ivory Coast are in Group H with Zambia, Comoros and Lesotho. Only one team will qualify from this group as Ivory Coast has already qualified as hosts.

Here are the full #TotalEnergiesAFCONQ2023 groups 👇

Who will reach the final tournament? 🤔 pic.twitter.com/SpWgkqt9TE

Kalou said a talented Elephants generation have a chance of lifting the trophy on home soil.

“Of course there’s pressure playing at home as it is not easy especially in the Ivory Coast. The pressure can be positive but when you are not playing well it can also be difficult.

“They have what it takes for sure but it is a matter of creating a team to win the tournament at home. That’s the only thing that will please the Ivorian fans.”

The group stage qualifiers stage kick off between May 30 and June 14.