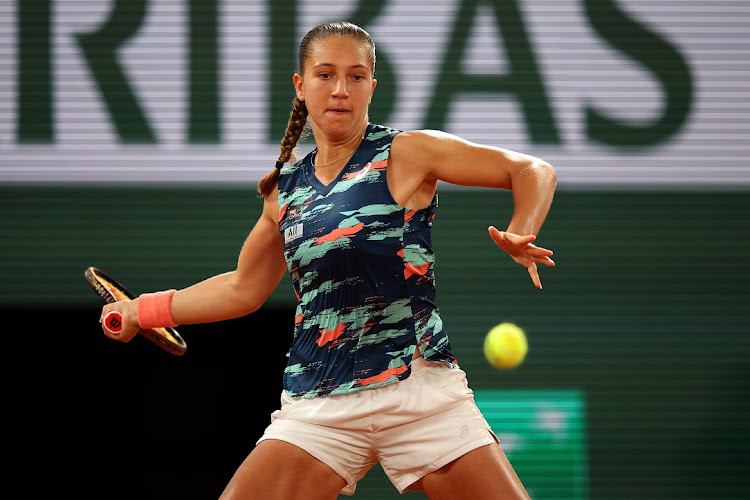 Diane Parry of France plays a forehand against Barbora Krejcikova of Czech Republic in their first round match on day 2 of the 2022 French Open at Roland Garros in Paris, France on May 23 2022.
Image: Adam Pretty/Getty Images

Barbora Krejcikova's French Open title defence ended in the opening round on Monday as local hope Diane Parry was roared to a 1-6 6-2 6-3 victory against the second-seeded Czech.

Krejcikova, who defeated Russian Anastasia Pavlyuchenkova in the 2021 final to win her maiden Grand Slam title, arrived at Roland Garros without any competitive matches under her belt since February due to an elbow injury. But she breezed through the opening set against the 97th-ranked Parry, who was facing a top-10 opponent for the first time in her career, in 34 minutes before her rustiness showed.

The 19-year-old Parry turned the match on its head by winning the second set as errors and double faults began to creep into Krejcikova's game. Krejcikova took a lengthy break after losing the second set and was booed by the partisan French crowd at the Court Philippe Chatrier on her return.

The 26-year-old Czech got an early break in the deciding set but Parry levelled things at 2-2 and then got the decisive break in the eighth game. Krejcikova found the net on match point for her 45th unforced error as Parry completed a remarkable victory with the crowd chanting 'Parry, Parry' throughout the contest.

“It's a dream for me. It was always a dream to play on this court with the French crowd to support me,” Parry said during an interview on court.

“They clearly pushed me to victory today. I'm the happiest person right now. It's never easy to start on this kind of court against the defending champion, you can get a bit tight, which happened in the first set but then I managed to relax.”

Parry will play Colombian Camila Osorio for a place in the third round.

Japan's Naomi Osaka crashed out with a 7-5 6-4 first-round loss to American Amanda Anisimova, a year after her dramatic withdrawal from the clay court Grand Slam tournament amid mental health issues.

Up against 27th seed Anisimova, four-time Grand Slam champion Osaka never looked comfortable on her least favourite surface as she struggled to control her powerful game.

Osaka falls short in Miami but finds comfort in loss

Naomi Osaka was certainly disappointed on Saturday after falling in straight sets to Iga Swiatek in the Miami Open final, but the four-time Grand ...
Sport
2 months ago

World number one Iga Swiatek put on a commanding display against Ukrainian qualifier Lesia Tsurenko with a 6-2 6-0 opening victory on Monday to kick-start her bid for a second title and extend her winning run to 29 matches.

Swiatek, who won the 2020 Roland Garros title without dropping a set, arrived in Paris having won her last five tournaments, including four WTA 1000 events, and is the overwhelming favourite to lift the Suzanne Lenglen Cup again.

“I just want to keep going. I am aware that someday my streak may stop,” Swiatek said on court. “Basically I am just working every day to be 100% focused on my tennis, not on stats or not on some numbers.”

Swiatek will face the winner of the match between Alison Riske and Dayana Yastremska next.