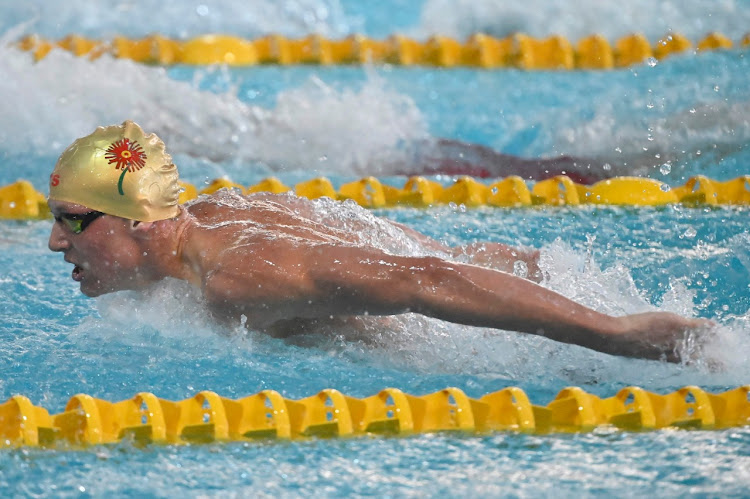 Pieter Coetzé in action in the butterfly at the SA championships last month.
Image: SUPPLIED

Coetzé first took the men’s 50m backstroke gold, touching in a 24.75 sec meet record to edge out American Michael Andrew by four-hundredths of a second.

France’s Yohann Ndoye-Brouard, a European bronze medallist in the 100m backstroke in 2020, was third in 25.00.

Less than an hour later Coetzé stormed through from nowhere to win the 200m backstroke in 1:58.27.

Matthew Sates landed two golds on the opening day of the Mare Nostrum gala in Barcelona on Wednesday, breaking a meet record in the 200m freestyle ...
Sport
1 month ago

For the first 100m he was way down in the field, and with 50m to go he had pushed his way into third place and then delivered a powerful final lap to push Britain’s Olympic bronze medallist in this event, Luke Greenbank, into second spot in 1:58.88.

Matthew Sates made it eight triumphs from eight races in the three-gala series as he won the men’s 400m individual medley in 4:13.05, comfortably beating David Verraszto of Hungary, a two-time world championship silver medallist, and Britain’s Max Litchfield.

Lara van Niekerk ended fifth in the women’s 100m breaststroke, fading on the second lap after hitting the wall in first place. Her 1:07.64 was way slower than her 1:06.08 personal best.