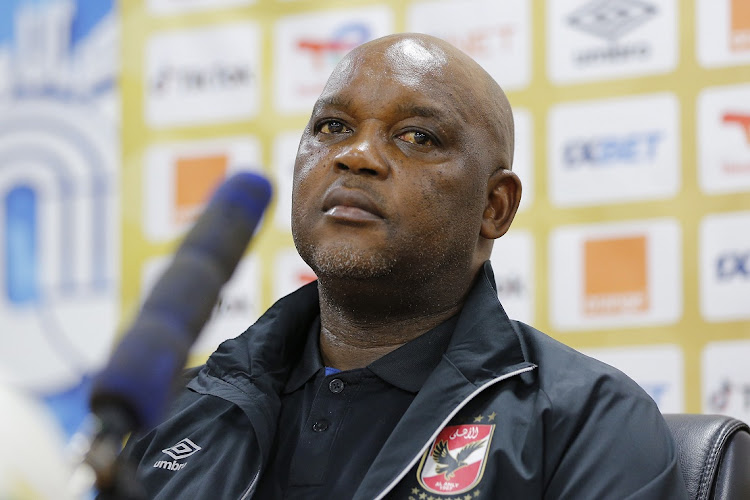 Mosimane said he knows it will be tough to beat the 2017 Champions League winners and 2019-19 runners-up at their 45,000-seat home venue (8pm in Morocco, 9pm SA time) as Ahly go in search of a third-straight title in the continent's premier club competition.

Morocco have been seen in the past as influential in Confederation of African Football (Caf) decision-making. The choice of venue for the Champions League final to the north African powerhouse for a second year running, made at the semifinal stage in May after Senegal withdrew its bid, was criticised by Mosimane then.

In his prematch press conference in Casablanca on Sunday the coach did not want to get drawn into complaining about meeting Wydad on their home ground, saying it “would be nice to win it here”.

“If you are going to look for other things outside that it's not going to be good for your preparations. So we prepare for the match and try to play the match on the pitch in the 90 minutes.

“It does not mean that the external factors do not play a role, but you can do better without talking or worrying about decisions that are not in your control and that are in the control of the people who make them.

“We are football people. The rest is politics. And it would be nice to win it here. I think it can be historic if we win it here.”

Wydad were Mosimane’s nemesis when, as coach of Mamelodi Sundowns, the Moroccan giants regularly thwarted his attempts to add to his 2016 Champions League title with the Brazilians. Mosimane appeared to shake his hoodoo when Ahly dismantled Wydad 5-1 on aggregate in the 2019-2020 Champions League semifinals.

Mosimane’s relationship with Wydad is a love-hate one as the fans of the club once chanted the name of the then-Sundowns coach at Stade Mohamed V after a 0-0 Champions League group stage draw in December 2019.

“Morocco has been good to me. It's not the first time I'm here,” the coach said on Sunday.

“I'm one of the four coaches who was invited to do the Caf Fifa Pro Licence in Rabat, with Walid Regragui, who is sitting here next to me interpreting for me; with the coach of Raja Casablanca [Rachid Taoussi], who was playing against me [in the quarterfinals].

“So I feel at home. It's just a different game to come to. I'm welcomed here so I'm happy to be here.

“Unfortunately we didn't win the game against Raja here. It could have been a different story if we'd scored the penalty.

“But we have come to play. And it's not about thinking if we can win or not. We believe we can win. We are Al Ahly, we are here to play, and you will see us.”

Ahly beat Wydad's neighbours Raja 3-2 on aggregate in the quarterfinals, winning 2-1 in Cairo and drawing 1-1 in Casablanca.

Mosimane is seeking to become the first coach to win three Champions League titles in succession in Monday’s final.