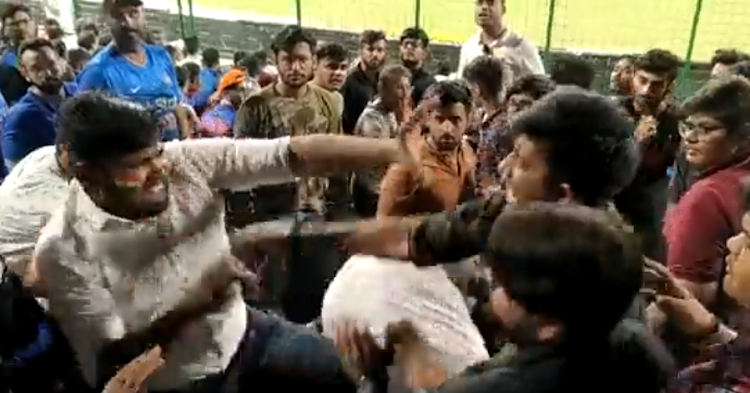 Spectators clashed at the match between the Proteas and India.
Image: Twitter/ @Punn_dit

The Proteas and India may be the main attraction on the field, but some fans grabbed all the attention last week when they got into a scuffle, reportedly over a flag.

A video of a fight during the first Twenty20 International match at Arun Jaitley Stadium in New Delhi has gone viral.

According to one fan, the brawl took place after an overzealous fan apparently brought a big Indian flag, “maybe obstructing” views of the action.

He said an argument ensued and someone grabbed a cellphone and recorded fists flying.

He was carrying a big Indian flag. So maybe obstructing their view. Started with verbal fight which led to this...

He claimed there were several fights in the stands but this may have been the only one that came to blows.

On the field, the Proteas showed their dominance with a good performance. David Miller smashed 64 not out off 31 balls to help SA chase down a 212-run target.

SA extended their lead in the series with another win on Sunday in Cuttack. Heinrich Klaasen hit 81 off 46 balls as SA beat India by four wickets.

The third match will take place in Visakhapatnam on Tuesday afternoon.

Fans flooded social media with reactions to the fight.

Here is a look at some reactions:

What about red shirt??

I have seen 2 matches in east stand ground floor in kotla and I have witness fight both times like this, this is just normal😂