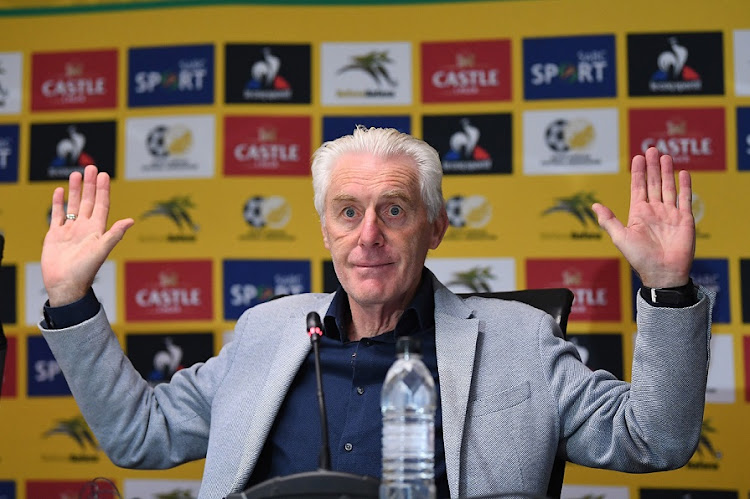 Bafana Bafana coach Hugo Broos did not hold back as he dropped bombshells in his press conference on Tuesday, taking a pot-shot at former Al Ahly coach Pitso Mosimane.

Broos levelled criticism at his employers, the SA Football Association (Safa), regarding the state of SA junior teams. He also slammed the standard of the Premier Soccer League (PSL) and level of players it has been producing.

Broos alleged Mosimane, who parted ways with Ahly on Monday, had publicly criticised him recently.

“When you have such troubles in your own team, like Pitso had at that moment, I do not understand why you have to criticise a colleague. So I am very disappointed in him about that,” Broos said.

“Four days before our game against Morocco Pitso decided to criticise me for a game that happened last year in September — because we did not send a medical report to Al Ahly about an injury to Percy Tau.

“It’s not what Pitso said. I have enormous respect for Pitso because what he has done in the past years as coach is fantastic, but I am disappointed in him as a colleague.”

Bafana Bafana coach Hugo Broos has ruffled feathers in the past and he was at it again on Tuesday, saying the level of the Premier Soccer League is ...
Sport
1 week ago

Broos questioned why Safa did nothing when the SA under-23 team did not play a single match in a year and expressed concern about  uncertainty regarding the coaching situation for the under-20 side.

“The SA under-23s last played a match in July at the Olympic Games. The under-20s have not played for two years. The under-17s, it is the same situation.

“OK, there was Covid-19. [But] how can you build with this kind of situation?

“There’s no coach for the under-20, it was [SA senior assistant coach] Helman Mkhalele and he is now with me at Bafana.

“The guys working there are working on a freelance basis. Let us face the problems in this country, let us sit down and come up with solutions.”