Williams sisters are legends, not me, says Swiatek after 36th straight win 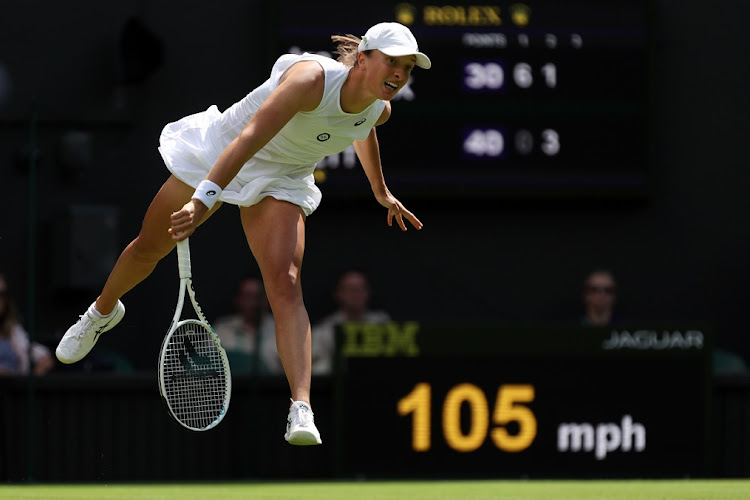 Iga Swiatek of Poland serves against Jana Fett of Croatia in their first round match at The Championships Wimbledon 2022 on June 28 2022.
Image: Clive Brunskill/Getty Images

With her first-round victory at Wimbledon on Tuesday, Poland's Iga Swiatek went past both Serena and Venus Williams by stretching her winning streak to 36 matches.

She does not, however, believe that the long run of success puts her in the same league as the American sisters.

The 21-year-old has won six titles in a row, including a second French Open trophy this month, and with her 6-0 6-3 victory over Croatian qualifier Jana Fett on Centre Court she became the first woman in the 21st century to rack up 36 consecutive victories. Swiatek moved past seven-time major champion Venus's run of 35 wins in 2000 after previously overtaking Serena, who has won 23 Grand Slam singles titles and registered 34 straight victories in 2013.

“Still when I see Serena or see Venus, they seem like... the legends,” Swiatek said.

“I don't consider myself a legend. They seem like the ones, they're the greatest of all time in tennis.”

A sucker for consistency, Swiatek described her winning streak as “amazing”.

“It just shows how much work we've been putting in for every match,” she said. “I'm pretty happy that I could show consistency because it was always my goal.

“I didn't know it was going to be possible for me to show that much consistency, and actually to win tournaments. But I'm just really happy and I'm trying to use it the best way possible.”

Swiatek travels with a psychologist in her team and thinks that helps deal with the burden of expectations.

“This is a Grand Slam. We have to perform better because the expectations around are bigger.

“I'm trying to avoid thinking about that and just accept it that it's there. But make my routines the same way so I feel the same way.”

Coco Gauff made sure she was not thrown off course by the noisy racket created by Nick Kyrgios in a nearby court or by the fact she managed to convert only four of 25 break points as she reached the second round.

With Australian hot-head Kyrgios up to his usual antics, yelling at the umpire and involved in heated exchanges with other officials during his first-round match, the commotion from Court Three might have distracted Gauff as she lost the opening seven points to Elena-Gabriela Ruse. But despite the inauspicious start, and her growing frustration in failing to convert so many break points, the 11th seed hung tough for two-and-a-half hours to seal a place in round two with a 2-6 6-3 7-5 win over the little-known Romanian.

Top seed Novak Djokovic overcame a dogged challenge from 81st-ranked Korean Kwon Soon-woo and his own grass court rustiness to reach the Wimbledon ...
Sport
1 month ago

“Both of us gave our heart on court today,” a beaming Gauff told the crowd after celebrating her win by thumping her chest with a clenched fist.

Former world number one Simona Halep returned to Wimbledon for the first time since winning the 2019 title and picked up exactly where she left off with an impressive 6-3 6-2 win over dangerous Czech Karolina Muchova.

The cancellation of the tournament in 2020 because of the Covid-19 pandemic and a calf injury last year meant the 30-year-old Romanian never got to defend the Venus Rosewater Dish. But against Muchova, a player whose 81st ranking belies her quality, she looked in the mood to reclaim it.

The 16th seed, who stunned Serena Williams in the 2019 final, was just too solid for Muchova whose lack of play this year because of an abdominal injury was cruelly exposed.