Ons Jabeur’s Wimbledon African dream so close yet so far 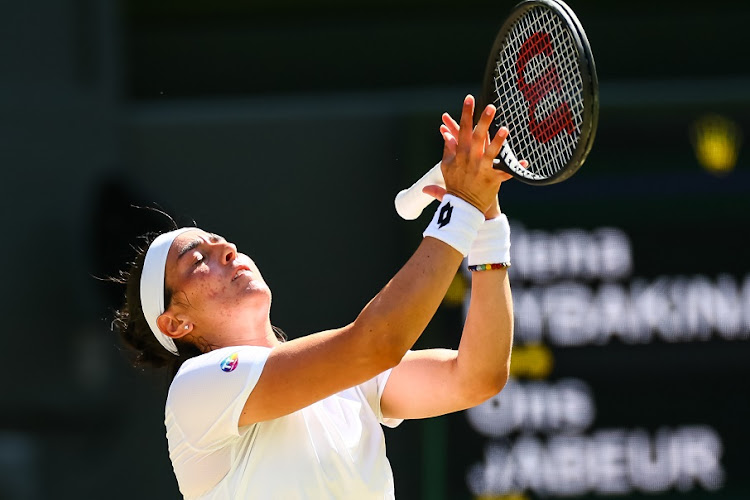 Ons Jabeur of Tunisia shows here frustration during her final against Elena Rybakina of Kazakstan of the Wimbledon Championships Wimbledon at the All England Lawn Tennis and Croquet Club on July 9 2022.
Image: Frey/TPN/Getty Images

When Ons Jabeur sat in her courtside chair, head hanging down and staring at the worn out grass surface, it is easy to guess the anguished thoughts running through her head — after all, this was not how she imagined her Wimbledon run would end.

Before Saturday's final against Russian-born Kazakh rival Elena Rybakina, the bubbly Tunisian had vivid visions of “giving a good speech, holding the trophy” and seeing her name printed on the green and gold honours board at the entrance to Centre Court. The problem for Jabeur on Saturday was that it was Rybakina playing the starring role in the celebrations after she earned Kazakhstan a maiden Grand Slam singles title.

“Elena stole my title,” Jabeur jokingly told the crowd after coming off second best in a 3-6 6-2 6-2 tussle. With the final taking place on the day Muslims celebrate Eid al-Adha, the 27-year-old had hoped to make it an even more joyous occasion by becoming the first African woman and the first Arab to win a Grand Slam singles title.

Jabeur was so fixated on winning that she had even replaced her niece's photograph with an image of the Venus Rosewater Dish on the screensaver of her mobile phone.

When she could not quite get over the finishing line, having failed to convert any of seven break points she earned in the last two sets, she ruefully admitted: “I really badly wanted that title. Maybe because I wanted it too much, I didn't have it.

“I did everything since the beginning of the year to really focus on this tournament. I even have the trophy picture on my phone,” she added, holding up the device for everyone to see.

The 15,000-capacity Centre Court crowd did their best to rouse Jabeur when they could see that the match was slipping away from the world number two. The cries of “Yalla, Yalla Ons” grew louder and after Rybakina leapt to a 2-0 lead in the final set, there were deafening roars before each one of the Tunisian's service games.

There were even moments when Rybakina's errors were greeted with cheers and winners with groans, but nothing could throw off the Kazakh ice-maiden's charge towards victory.

“I was expecting myself to return better, especially take the opportunities that I have to break her so many times,” said Jabeur, whose opponent struck 29 winners on Saturday.

“It is frustrating to play someone that serves really big and doesn't give you the chance. She played most of the break points really well.

“Deep inside I really tried everything I could. I tried telling myself, 'This is not over, I trust you'. I even said 'I love you' to myself during the match.

Despite falling one set short of her ultimate goal, the Tunisian trailblazer knows that she has brought a lot of happiness to millions of people around the world and is confident that it is only a matter of time before she joins the Grand Slam winners' circle.

“I don't disbelieve myself and I know that I'm going to come back and win a Grand Slam, for sure. I have to learn from it, definitely. I'm very, very positive about it,” said Jabeur, who can expect a memorable homecoming when she returns to Tunisia next week.

“Just the beginning of great things for me. I'm trying to inspire many generations from my country. I hope they are listening.”