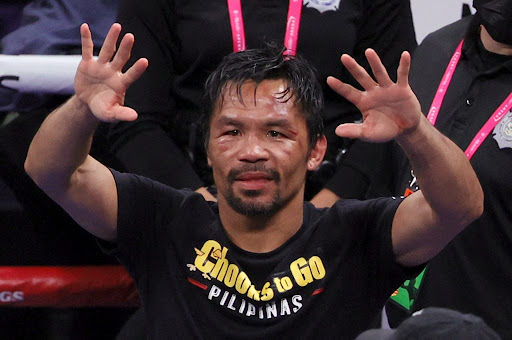 Manny Pacquiao faces a huge challenge to convince the Philippines electorate he can make the switch from boxer to the presidency.
Image: Ethan Miller/Getty Images

Boxing legend Manny Pacquiao may have signed up for his toughest fight yet in running for president of the Philippines, facing doubts about his leadership and commitment as a lawmaker that could dent his appeal and deal a big blow to his ambitions.

The 42-year-old announced his candidacy on Sunday, declaring his readiness to “rise to the challenge of leadership” and battle poverty and corruption.

As an eight-division world champion, Pacquiao is a national treasure, but analysts say he faces a huge challenge to convince the electorate he can lead a nation beset by problems ranging from crime, graft and natural disasters to Islamist extremism, outdated infrastructure and bloated bureaucracy.

“Can he really govern? He said he would surround himself with knowledgeable people, but at the end of the day, it is still the president who decides,” said political analyst Earl Parreo.

To win the May 2022 election, Parreo said, Pacquiao must show how he can steer the country and its struggling economy out of one of Asia’s worst coronavirus epidemics.

A faction of the Philippines' ruling political party on Sunday nominated boxing star Manny Pacquiao as the party's presidential candidate for the ...
News
4 weeks ago

“The problem is how to govern after winning,” he added.

Pacquiao is no political neophyte, having served as both congressman and senator, winning elections with ease due to his mass appeal as one of world boxing’s all-time greats, and his rags-to-riches life story.

The presidency, however, could be too soon for Pacquiao in the eyes of some ordinary Filipinos.

“He is not yet ready and there are many more deserving who have been there longer ... and have more experience,” said tricycle taxi driver Edwin Loza, 65.

“If ever he wins, he will have to face many problems.” His commitment to public service has also been questioned, with a poor attendance in congress and lengthy disappearances as senator while training for big-money fights abroad.

“We all know Pacquiao, though he is a very good man and his heart is in the right place, did not perform well as a senator,” said Victor Andres Manhit, MD of think tank Stratbase ADRi.

Ageing Pac Man is gobbled up by Cuban Ugas

“He was not attentive in the senate so people might find that lacking.” That may partly explain why he trails in opinion polls on preferred presidential candidates.

With the constitution only allowing a single term as president, Pacquiao will not have to take on popular incumbent Rodrigo Duterte, but he could face a formidable opponent in his daughter, Sara Duterte-Carpio, who looks to have inherited her father’s cult-like following.

Despite repeatedly saying she will not run, Duterte-Carpio, 43, has topped every opinion poll this year on preferred candidates.

The polls also show Pacquiao’s appeal to be weak across all classes, though he appears to enjoy support in several regions considered bailiwicks of the Dutertes. He could, therefore, make a dent in their support base.

As senator, Pacquiao allied himself with Duterte, backing his bloody war on drugs and push to reintroduce the death penalty, but has sought to distance himself lately, complaining of government graft and criticising Duterte’s inaction against perceived Chinese aggression in the South China Sea.

“It was his first step to be more independent,” said Manhit.

“I would have wanted senator Pacquiao to be more assertive in his true position.”