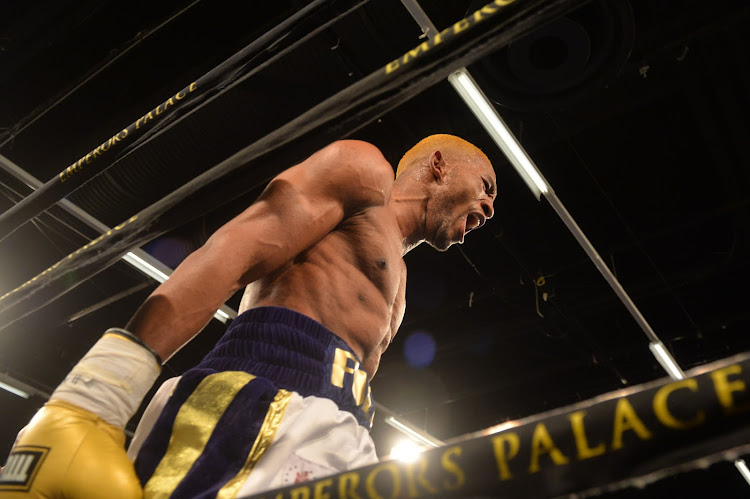 Azinga Fuzile's trainer Mzamo “Chief” Njekanye says the boxer's loss in a world title challenge at the weekend is a learning experience that will serve them well in future.

Fuzile lost a unanimous decision to Japanese Kenichi Ogawa after he was dropped three times in a vacant IBF junior lightweight title clash at Hulu Theatre in Madison Square Garden, New York on Sunday morning. The scores were 115-110 twice and 114-111, meaning the three knock-downs cost Fuzile according to the judges' scorecards.

Njekanye, who was assisted in the corner by Sean Gibbons, defended their fight strategy and insisted that had Fuzile not been dropped he would have won the fight. The judges scored the fifth round 10-8, when Fuzile first suffered a knock-down, and the 12th round 10-7, when he was dropped twice, meaning the only difference in the scorecards was five and three points of the knock-downs.

“I told the boy that we were very much in the fight and the judges were impressed by what we were doing,” Njekanye said from the US.

“This is giving us solace and proves that we did not come here to lose. In fact, if anything, the fight offered us a learning experience which will help us going forward. The boy is still young and has a bright future ahead to even bounce back and win a world title.”

Azinga Fuzile’s world title challenge fizzled out in the face of Kenichi Ogawa’s right-handed assault in New York on Sunday morning (SA time) as he ...
Sport
1 month ago

Njekanye said Fuzile was disappointed at the loss, but he had comforted him by pointing out the positives from the fight.

“Sometimes they say a setback is the great learning experience and to us this proves true.”

He refused to comment on supposed discontent in the Fuzile camp, that he and the boxer's manager Colin Nathan, who represented Rumble Africa Promotions, were not on speaking terms.

“All I can say is I do not know what Colin was doing here because obviously he did not come here as part of our team. It is true that he and I did not speak, and I saw no reason to speak to him. But I will reveal everything when I return home.”

Njekanye and Fuzile are scheduled to arrive in East London on Wednesday after their return flight was cancelled due to the suspension of flights from the US to SA because of the Covid-19 variant Omicron.

Despite the loss, scores of people are expected to welcome the 25-year-old Duncan Village boxer when he touches down in East London at 4pm on Wednesday. Former world title challenger Jackie Gunguluza, who also failed to win the title Fuzile was fighting for,  implored boxing fans to go the airport and welcome Fuzile, emphasising that the southpaw represented the country well on the biggest stage of world boxing.

“Fuzile did all he could, but he lost on the night,” Gunguluza said. “I also lost to John John Molina for the very same title Fuzile was fighting for, but I bounced back. Azinga will also bounce back from this loss, so I appeal to boxing fans to give him support.”

Gunguluza was knocked out in four rounds by Puerto Rican Molina when he contested the IBF junior lightweight crown relinquished by Brian Mitchell in 1992.