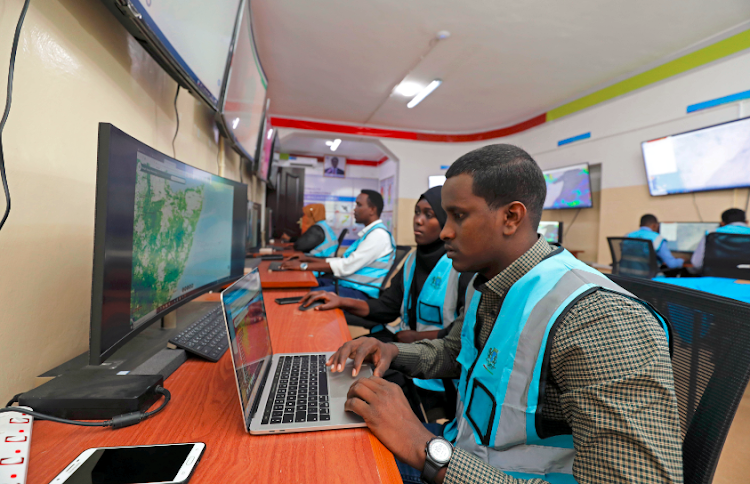 At a government building in a former United Nations compound in Mogadishu, Khadar Sheikh Mohamed stares at a bank of giant screens displaying weather conditions across the country.

Mohamed is the director of the new national disaster early warning centre designed to help Somalia predict disasters. This year it has already suffered from flooding and a locust invasion.

"Finding the accurate data which may save lives is ... important for us," he told Reuters at the centre.

The centre opened in June, and is funded by Saudi Arabia through the United Nations' World Food Programme. It was conceived after cycles of floods and drought caused widespread food shortages, including a famine in 2011 that killed more than a quarter of a million people.

Out of Somalia's 15 million people, 5.2 million currently need aid, the United Nations says, and more than 2.6 million are displaced due to fighting and natural disasters.

Somalia has been rent by civil war since 1991, and a fragile, federalist government is battling al Qaeda-linked al Shabaab insurgents.

The violence has destroyed almost all the country's infrastructure and driven many educated Somalis abroad, but in recent years the internationally backed administration has been trying to rebuild government institutions.

At the centre, dozens of Somali analysts use the latest satellite data, from temperatures to wind pressure, to provide early warnings for flooding, drought, and locust movements.

"Somalis don't really have the expertise," said Muqtar Sheikh Hassan, the director general at the ministry of humanitarian and disaster management, so they had hired foreign experts to train local analysts.

Now the centre is fully staffed by Somalis, said Mohamed. "Sometimes you have only 24 or 72 hours to evacuate people. If the information is in another language, it takes more time to translate and disseminate. Now we are able to release warnings quickly."