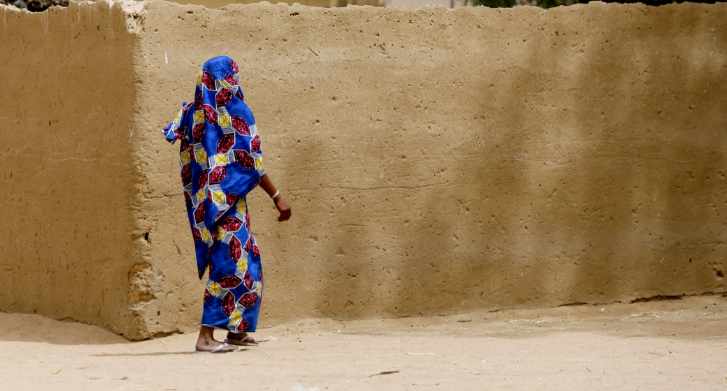 School kidnappings were first carried out by jihadist groups Boko Haram and Islamic State West Africa Province but the tactic has now been adopted by other militants whose agenda is unclear.
Image: REUTERS/Afolabi Sotunde

Relatives of more than 300 girls abducted by gunmen from their boarding school in northwest Nigeria endured an agonising wait for news amid rumours that they had been released, while security forces continued their search on Sunday.

An armed gang kidnapped 317 girls from the Government Girls Science Secondary School in the town of Jangebe, in Zamfara state, at around 1 a.m on Friday.

Zamfara police have worked alongside the army in a search-and-rescue operation since Friday.

The raid in Zamfara state was the second such kidnapping in little over a week in the northwest of the country, where schools have become targets for mass kidnappings for ransom. Nigeria's President Muhammadu Buhari on Friday urged state governments not to reward "bandits" with money or vehicles.

Gunmen seized more than 300 girls in a nighttime raid on a school in northwest Nigeria on Friday and are believed to be holding some of them in a ...
News
1 month ago

School kidnappings were first carried out by jihadist groups Boko Haram and Islamic State West Africa Province but the tactic has now been adopted by other militants whose agenda is unclear.

On Saturday, gunmen released 27 teenage boys who had been kidnapped from their school on Feb. 17 in neighbouring Niger state.

Parents in Zamfara are hopeful that they too will receive good news.

Balarabe Kagara, whose two 14-year-old daughters are among those taken, said he was praying for their safe return and remained hopeful.

"I will be very happy if I see my daughters," the 54-year-old farmer said, his voice cracking with emotion, while sitting on a mattress on the floor and gazing at pictures of the two girls.

Rumours circulated on social media on Sunday that the girls had been released. They prompted Zamfara state government to issue a statement in which it said the governor Bello Matawalle was unhappy that someone would "try to further hurt the victims' parents" with "falsehood".

Gunmen in Nigeria on Saturday released 27 teenage boys who were kidnapped from their school last week in the north-central state of Niger, while ...
Africa
1 month ago

Abubakar Isa, whose 17-year-old daughter is among those missing, said his hopes and those of other parents were initially lifted by the rumour.

"We heard that they will be released today, so we gathered at the school premises to receive them but it turned out to be rumours," he told Reuters by telephone.

Isa said Saturday's release of the boys taken in Niger gave him hope, but he remained fearful of the gunmen's motives.

At his home in Gusau, Kagara said he was unsure about whether children would eventually return to school.