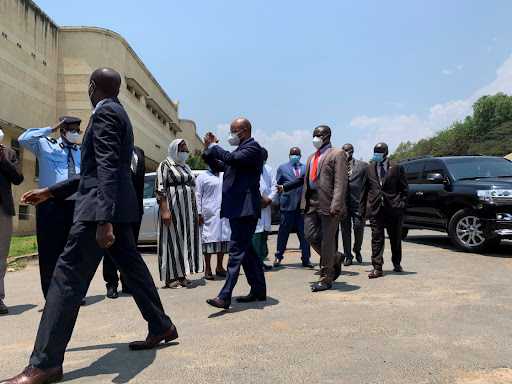 Explosions killed at least five people and injured 50 in Burundi's largest city Bujumbura on Monday night, the prime minister and a health worker said after the latest in a string of attacks in the east African country.

The interior ministry said on Twitter that “unidentified terrorists” were responsible. There was no immediate claim of responsibility for the grenade attacks.

Two grenade explosions hit a bus parking lot in the city centre, according to seven eyewitnesses, while a third blast hit Jabe market in the Bwiza neighbourhood, according to another witness.

Five people were killed and about 50 wounded, a health worker helping to care for the injured said on Tuesday. The witnesses and the health worker requested anonymity.

Rwanda said on Monday it had detained Paul Rusesabagina — the man who was hailed a hero in a Hollywood movie about the country's 1994 genocide — on ...
Africa
1 year ago

During a visit to the wounded in hospital, Prime Minister Alain-Guillaume Bunyoni told reporters the government would help the wounded.

On Sunday, a grenade attack in the administrative capital Gitega killed two, according to local media. It was not clear who was responsible.

The Democratic Republic of Congo (DRC)-based rebel group Red Tabara claimed responsibility for a mortar attack on Bujumbura airport on Saturday. The group said it had fired mortars at the president as he prepared to travel to the UN General Assembly in New York.

Red Tabara, which has a base in South Kivu in DRC, was formed in 2011 with the aim of overthrowing the government, which it says does not respect the rule of law. It has been blamed for scores of attacks.

Burundians accused of having ties to the DRC-based rebels have been tortured and likely disappeared, Human Rights Watch said in a report on Friday.

Unidentified bodies have been found in the river separating Burundi and DRC in recent months, it said.

Burundi, a nation of about 11.5-million people, has suffered decades of war. The UN says the youth wing of the ruling party and the security services are complicit in the torture, gang-rape and murder of political opponents, charges the government denies.