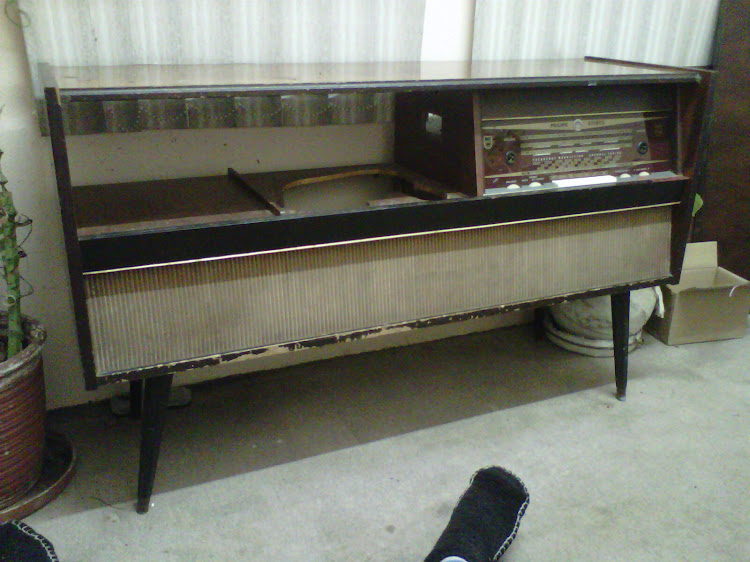 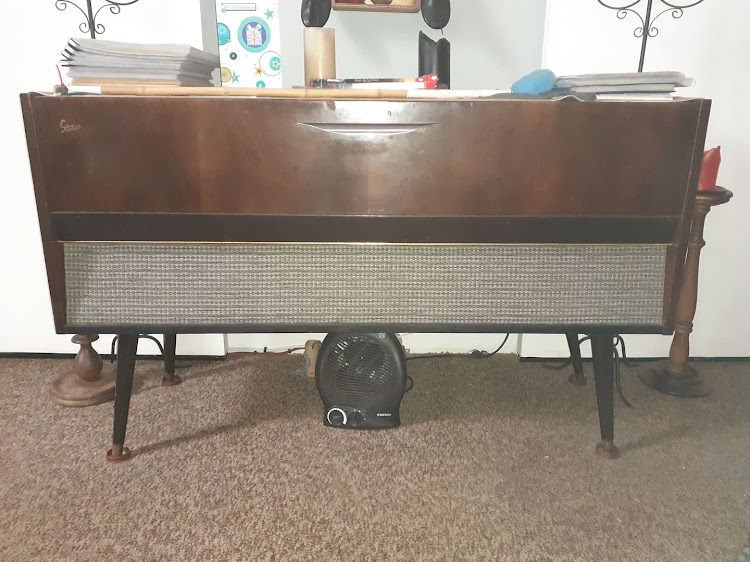 An old Phillips radiogram has been in my family since new — which was back in 1964.

Unlike most antique radios that look the way it does, all shiny and still in working order, it’s had a very hard life.

Not only was it used a heck of a lot by my parents, it also had to suffer my battering as a young child.

Dad was a smoker, as was my mother, but unlike her, he carelessly left his lit cigarettes atop the radiogram, with is sustaining several burn marks over the years. Liquor was often spilt and left stains on the veneer too.

As a preteen, this was the only record-player/radio we had, and so every Saturday morning I’d get up and start playing old records.

My favourites, usually the Beatles, Disney LPs and 70s disco, (yes really), and usually, over and over again.

Anyway, this old radiogram was moved around a lot too — before my birth, my folks moved from rooming house to rooming house, then from flat to flat.

Afterwards, it travelled with us to our present abode in 1985, and has been there ever since.

I used it as a table in my bedroom in my teens, and later, as a headboard behind my bed.

I kept books and tapes on top of it, and a portable radio/tape/CD player — and my CD collection in the 90s.

At one point, as a teen, I remember wanting to play DJ, and connected a second LP turntable to the wiring of the radiogram ... that was quite a light show.

I’d never seen valves pop like that before. It was pretty much dead after that ... and feeling guilty, I let it lie as a piece of furniture.

It’s suffering didn’t end there, however, since it moved frequently from one room to the next — cassette tapes replaced LP’s and then CD’s too came along, until this old appliance became first a curiosity, then an obstacle and even, an eyesore.

Eventually, in about 2000, it ended up on the front veranda, holding up a heavy pot plant and layers of dust.

Part of the cabinet (made from chipboard) had absorbed water and was swollen, caused from spillages when watering the plant.

The old radio was on the verge of its end. It’s next move would be to get thrown out as scrap.

If you get a funny feeling whenever you throw away a can, that’s probably because: A — you care about the environment and just can’t bear the thought ...
Lifestyle
4 months ago

Partly, I wanted to make up for the damage I’d done as a teen, and partly I wanted to restore it to working order because it could still be a beautiful antique.

I set out by removing the internals and then completely dismantling the cabinet.

Everything that could be reused was cleaned and preserved.

I decided early-on that it would be best to treat the internals and the cabinet as two separate projects.

My first concern was the structure of the cabinet. The entire thing was built out of chipboard, most of it veneered, but chipboard none the less.

The top, shiny counter top had soaked up some water, but fortunately was dry and solid, if left a little swollen on the inside surface only.

The sides, door and other components were still fine. It was the bottom or floor of the cabinet that was completely ruined. It had absorbed water and begun to separate. There was no saving that.

My solution was to replace it with a real wood pine plank, which I cut to the correct size and fitted.

This would be much stronger than the original in any case, and since the edge of the chipboard original had been matched with a piece of hardwood veneer, I was able to rescue that and glue it to the pine.

Outwardly, the cabinet looks exactly like it should, with the only difference being the addition of the pine replacement, which I also painted with black acrylic (the original board wasn’t painted at all).

The speaker cover was a rectangular board with holes over the speakers, covered in material.

The original material was faded and threadbare, and I decided it best to recover it with new material in a suitable colour and pattern.

The construction of the piece was such that I had to fit the speaker cover back into place before replacing the cabinet floor (the pine piece I referred to above).

As for the rest of the cabinet, all it required was a thorough clean and polishing.

The door had a few chips, which I filled over and tried to match to the veneer as best I could.

Turn your home into a DIY cinema

With big screens likely out of action until mid-July, Victoria Lambert created the next best thing in her own back garden
Lifestyle
7 months ago

The original handle had been originally removed by my parents because as a toddler I had the curious habit of bumping my head on everything that stuck out at head-height. It was  subsequently lost.

In its place were two screw holes, which didn’t look very nice.

I couldn’t find any original parts anywhere, so I compromised by looking for a modern handle in a similar style to the original, and was lucky enough to find one, which I fitted, using the same original screw holes and inside cover caps.

Once all that was done, I switched my attention to the legs.

I completely disassembled them and did a wire-brushing of the mounting plates before lubricating and reassembling them.

Using their original positions on the old floor plank as a reference, I refitted them to the new floor.

Wherever possible, I reused the same original screws, but where I thought it better, I used modern sturdier screws.

I also added a few extra supports internally out of sight, for example, the white plastic corner braces you can see in some of the accompanying photos.

Nothing says ‘I love you’ more than a handcrafted, Mother's Day gift. Brush up on your knotting skills because the sassy 70s décor is back, baby! Try ...
Lifestyle
8 months ago

This radiogram model was the first FM stereo model produced by Phillips in 1964, and it offered radio in FM mono/FM stereo, MW and SW. The record player gave speeds of 16, 33, 45 and 78rpm.

It also had an interface panel to allow external speakers to be connected, as well as a tape recorder input and power outlet.

None of these ever matched anything I ever had, since these were well before the time of the common, modern audio jack.

It’s worth noting that I took tons of pictures during the stripping-down process to remember where everything went when reassembling it all.

I also placed every small part I removed into a small bank packet with a note of what it was and where it came from. This made things much easier overall.

The two original speakers inside the bottom of the cabinet were shot, and I sourced a pair of brand new modern equivalents from a specialist sound shop for a reasonable price.

I rewired everything as far as possible throughout the cabinet, except for the pair of internal radio antennae.

East London local Debbie Penny has always loved making things and used to delve into the world of clay as a teenager but it took weeks of being stuck ...
News
2 months ago

The radiogram was dusty and some of the plastic/rubber components had aged and perished a little, so I rejuvenated what I could (ammonia does wonders for old plastic, did you know that?) and bought a brand new (NOS) Phillips diamond-head unit for the phonograph arm from a specialist electronics shop ... their very last one!

I had no idea how badly the radio itself was damaged as it did not work any more, so I slid it out and took it over to TV Doctor for a look-see.

Their eyes nearly popped out when they saw what I’d brought them.

Fortunately, their senior tech was familiar with valve radios and set about investigating.

A couple of days later, I got a call to tell me there was virtually no damage — it was mostly a cleaning-up mission which entailed removing the valves and cleaning their contacts and putting them back.

Did you know that radio valves are still available? I didn’t!

Anyway, they replaced two old valves and reconditioned the rest of the unit — and tested it on a bench power supply.

The only thing they couldn’t fix was the power transformer — which had essentially disintegrated due to age.

I had to have a transformer specially made in the end, and there are businesses that make them to order.

Odd poses, a lot of stretching, some deep thought and a wealth of physical, mental and spiritual benefits are what those attempting a yoga class can ...
News
2 months ago

I delivered the original transformer to a local transformer manufacturer in town, together with the power requirements of the radiogram.

About a week later, I was called to collect the new unit, which cost me something like R600 back then.

They did a brilliant job. The new transformer was only a little physically larger than the old one, so it fitted perfectly.

All I had to do then was to return the radio unit to its place, and fire it up.

I was rewarded with a fully-working and restored radiogram.