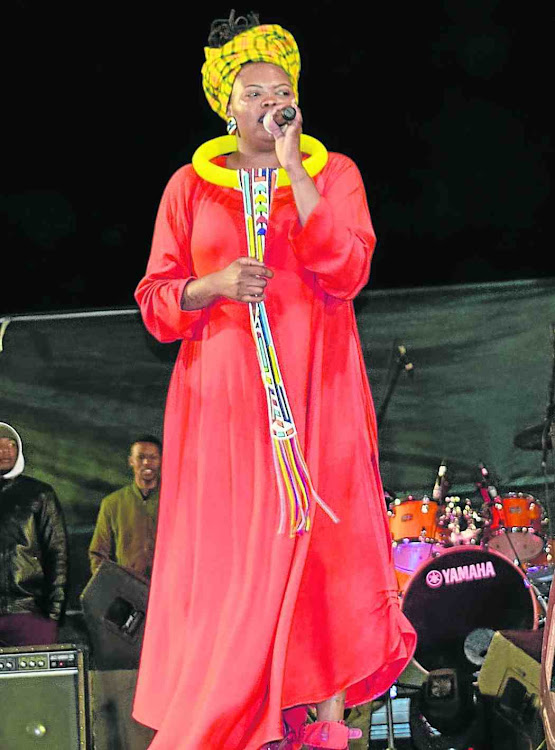 The singer has described the 13-track offering as food to feed the spirits of a nation in need.

“The physical is fed enough because we have been feeding flesh for such a long time and forgetting to feed ourselves emotionally.

“I feel that there is no better time than now to focus on matters that are not tangible and parts of ourselves that we always disregard.”

The making of Chosi has been a journey of self-healing and a platform for her to speak out on issues of femicide and difficulties faced by women daily, Mda said.

“I started conceptualising this album about 2016 and 2017, when most of us were shaken by the news of Karabo [Mokoena] being murdered by her ex-boyfriend and other news of femicide.

“I was so angry and scared, feeling like no-one out there is looking out for me (as a woman), so I wrote most of the songs from a woman’s perspective — a day in the life of a black woman living in SA in fear,” she said.

“Everything I’m passionate about is communicated in the lyrical content of the album but it was mostly triggered by [abuse] that women go through every day, even in the so-called safety of their own homes,” she said.

“Langa, the song I made with Sjava, is a bit light and loosens up the darkness and sadness in the other songs.”

Mda  said she titled the album Chosi to respectfully command attention as one would in Nguni languages before telling a story.

“In Xhosa, when you are about to tell a story, you say chosi, chosi ngantsomi and the listeners will respond by saying chosi to acknowledge.

This is because I felt like I was about to tell a story or start a journey, and I need everyone to gather about and listen

“This is because I felt like I was about to tell a story or start a journey, and I need everyone to gather about and listen.

“Even when we communicate with our ancestors, we say makube chosi kube hele, which means ‘let it be, let there be light and let all that we wish for manifest’,” Mda said.

Mda revealed in 2019 that she was pursuing a  solo career while continuing to be a member of a capella group The Soil.

The decision, Mda said, was accompanied by self-doubt and fear, but she always knew her gift would require her to stand on her own at some point.

“I always knew I was born to stand out and my calling to heal is broader than what I could offer in a group, and broader than myself.

“I had and still have a lot of self-doubt about the move to go solo because when you’re a woman you constantly have to prove your abilities, your gifts and even your qualifications.

“Even now I am still scared, but that doesn’t stop time from moving and the album from coming out,” Mda said.