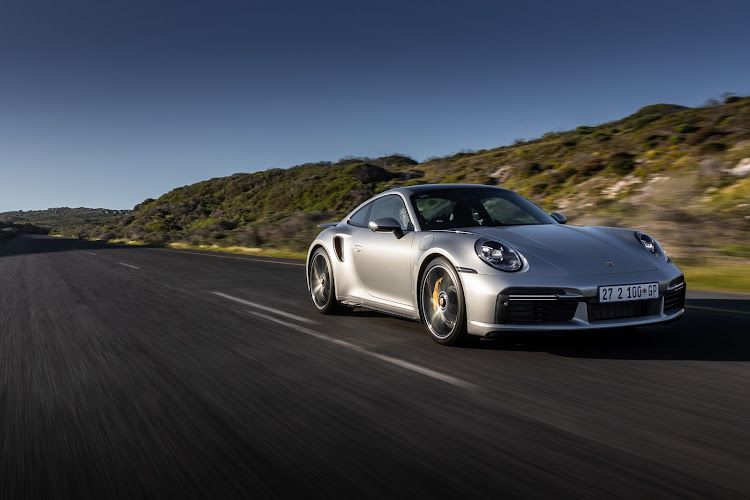 The personalised plate proclaims the car’s ability to sprint to 100km/h in just 2.7 seconds.
Image: SUPPLIED

The Porsche 911 Turbo S, that paragon of supercars with everyday useability, has arrived in South Africa in its latest incarnation.

It will also be available as a standard 911 Turbo model with lesser power outputs of 427kW and 750Nm, but according to Porsche’s public relations man, Christo Kruger, most buyers in power-hungry SA are expected to choose the full-fat Turbo S with its 478kW and 800Nm.

The 911 Turbo — in its standard and “S” guises — has for decades served as a go-to car for sports car buyers seeking excitement and comfort in equal measure, and the new version goes even further in combining these discordant disciplines.

In the speed stakes the rear-mounted 3.8l flat-six biturbo engine in the S has been muscled up with 51kW more power and 50Nm more torque than its predecessor, which snips 0.2 seconds off the 0-100km/h time to just 2.7 seconds.

The Turbo S coupe I drove at the launch in Cape Town cheekily advertised this feat with a personalised number plate, and by the feel of it, it was no false claim. With launch control, off-the-line acceleration is brutal. You can feel the g-forces draining blood from your head as the all-wheel drive car leaps off the line with no wheelspin. It’s quite breathtaking.

There’s no softening of thrust as the Porsche blitzes into higher speed zones, and the 200km/h mark comes up in just 8.9 seconds, one second quicker than its forerunner.

The car displays phenomenal directional stability during its accelerative blitzkrieg, and the steering doesn’t jolt around even on unkempt tar. It is a thoroughbred machine made to go 330km/h and it does it superbly.

I recently drove the outgoing 991 generation Porsche GT3 RS and the stark difference between the two cars underlines the civilised and refined 911 Turbo S recipe. Where the GT3 is all loud and brash bravado, the Turbo S is polished poise. The Turbo S is the faster car and will show the normally-aspirated GT3 a clean pair of heels in a head-to-head race, but it’s quieter and softer-riding and all-round less edgy. 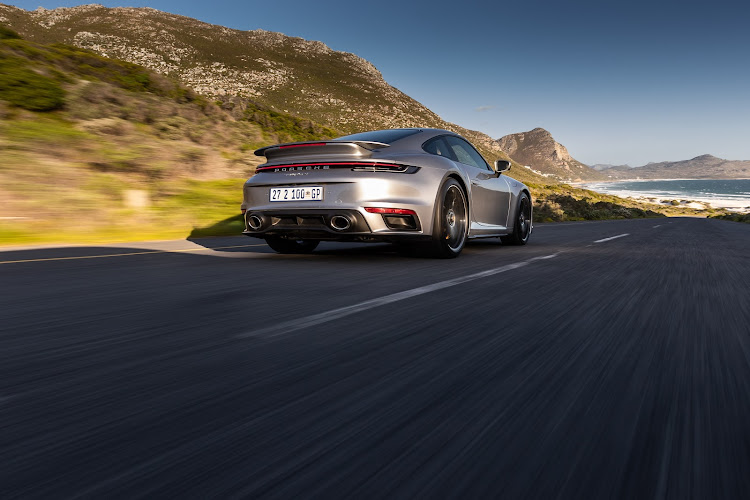 It’s always fast, but set to its normal driving mode the Turbo S has a plush ride and a commuting-friendly demeanour. It tootled through the Cape’s urban streets with a relaxed air and felt comfortable over a drive of several hundred kilometres.

Switch to Sports or Sports plus modes and, like the line in the Rocky Horror song, madness takes its toll. The car adopts a much racier edge with quickened throttle and stiffened suspension.

Riding on a sports chassis lowered by 10mm compared to the regular 911 Carrera, the Turbo S feels crisp and quick through snaking mountain roads like Franschhoek Pass. Displaying polished playfulness, the all-wheel drive traction’s superb and it takes vigorous driving to elicit a squeal from the mixed-size tyres, which are 20 inches at the front and 21 at the rear.

The Porsche Traction management (PTM) all-wheel drive system allows significantly more torque to be transferred to the front wheels than before. It reduces the potential for tail-happy antics but without causing understeer, and the Porsche tracked neutrally through hard-charging corners.

The standard-fit ceramic brakes bite hard without fading, and the PDK dual-clutch automatic gearbox is a thing of slick-shifting finesse. Underpinning it all is the 911’s trademark solidity, as if the car was made of a solid piece rather than an assemblage of parts.

The Turbo S doesn’t have the sonic exuberance of the high-revving GT3, but there’s a degree of acoustic charm when the sports exhaust mode is selected. 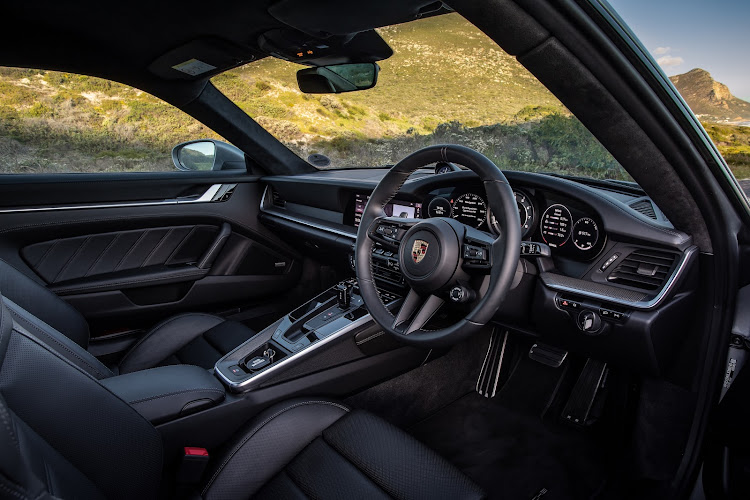 Cabin is all about business-class efficiency rather than theatrical styling.
Image: SUPPLIED

It’s also visually subtle in the scheme of sports cars, though a wider body than its predecessor gives it a more purposeful, hunkered-down road stance. It also has adaptive aerodynamics with automatically controlled cooling air flaps at the front and an enlarged rear wing with more downforce.

Inside, an analogue rev counter takes centre stage in the instrument panel as per tradition, flanked by two digital gauges on each side. Curiously, the outermost two gauges are blocked from the driver’s view by the steering wheel, an unusual ergonomic quirk by the usually fastidious Germans.

Other than that, the cabin is a model of businesslike efficiency. Again, there’s no GT3-style theatrics, and the monochromatic décor is subtly spiced up with carbon trim and light silver accents.

Combining high-speed intensity with comfort, the 911 Turbo S may well be the perfect day-to-day sports car.