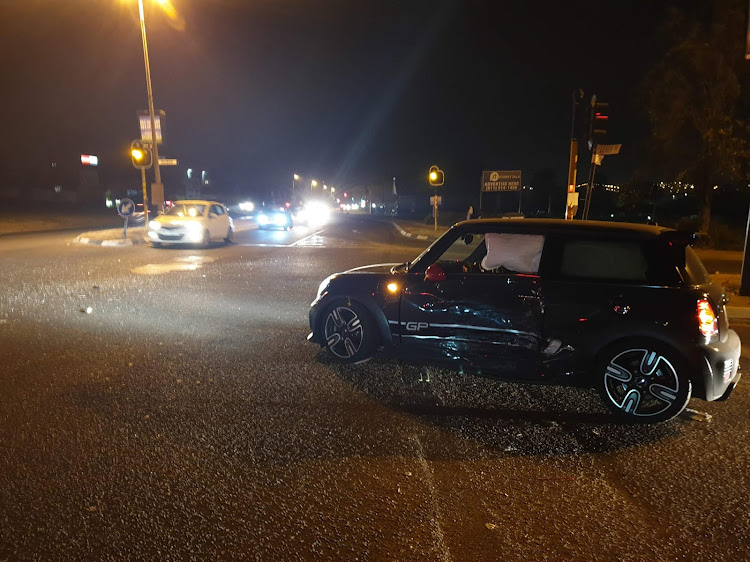 Lucian Rajah described a side impact collision in his 2013 Mini John Cooper Works GP (R56) as a near-death experience.

Only 2,000 were produced in total and his was one of 30 units BMW SA brought to local market.

After the misfortune he never saw the vehicle again since it had been taken in by his insurer.

Imagine his surprise when earlier this year he identified the vehicle listed for sale at a BMW dealership in Johannesburg, sporting a plate that deemed it part of their approved pre-owned stock.

He shared his findings via a Facebook post and then brought it to the attention of BMW Fourways, the seller, in email correspondence with Graham Schultz, sales manager, on September 8. 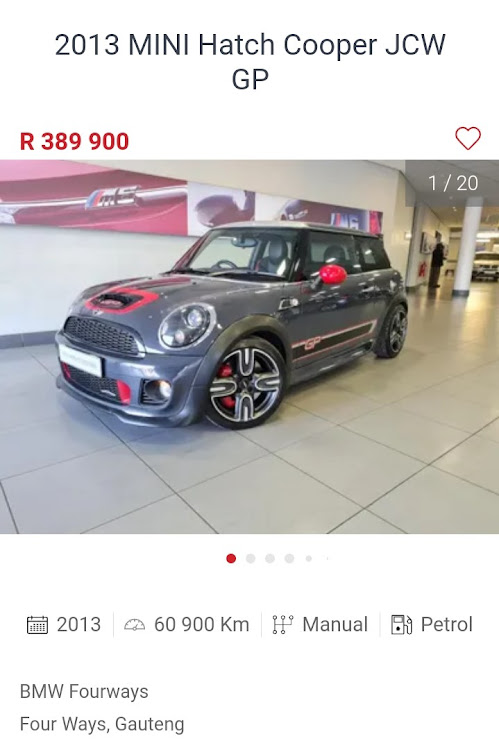 The BMW Fourways classifieds listing of the Mini JCW GP that was removed.
Image: Supplied

He provided the case number supplied by authorities who were at the scene the evening the incident occurred, in addition to images of the damage.

“The registration number is different but the VIN does match,” Rajah stated.

Initially, his concern appeared to be met with scepticism.

Schultz responded: “The damage in the photos seems localised and limited to a door, limited parts of the fender, side strip and one airbag. This will not normally result in a write-off or indicate any structural damage as you seem to imply or may be insinuated in your public comments. Please send proof of write-off, which your insurance will provide.”

He provided an agreement of loss letter from service provider Hybrid Risk Management declaring the vehicle as a write-off. It was dated July 17 2019.

Volkswagen announced on Tuesday that its facelifted sixth-generation Polo range will roll onto SA showroom floors in January 2022.
Lifestyle
2 weeks ago

Rajah noted the damage was more extensive than what Schultz described.

“Two airbags had deployed and the roof had kinked [inwards] as a result of the b-pillar taking the hit, not visible to poor lighting.”

He urged the representative to corroborate with the insurance service provider.

“Regardless, there is no arguing the vehicle has been in a serious accident.”

We reached out to dealer principal Riaan Roux on November 11. He responded on the same day.

“We procured the Mini Cooper JCW by means of a trade in on a vehicle sold. There was nothing suspicious or untoward regarding the vehicle. The Natis document stated the vehicle as a normal used Code 2, and at the time there was no comment on the BMW system.”

“As is normal procedure, we marketed the Mini on various websites. At some point we were contacted by presumably Mr Rajah, who informed us our purchase was potentially a ‘write-off’.” 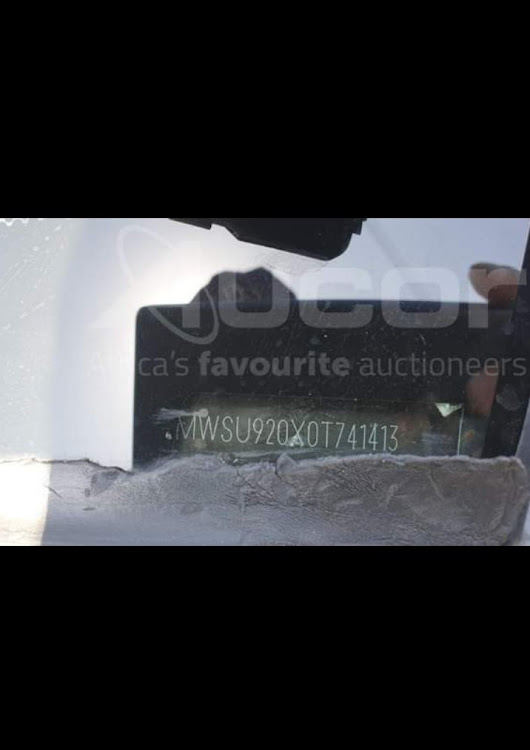 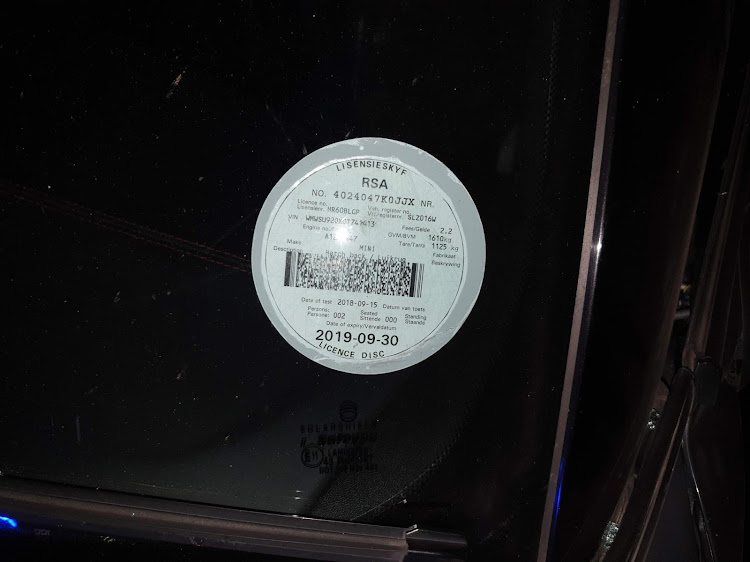 Roux confirmed, following an investigation, that the vehicle in question was involved in an accident. He said the assessor’s report in their possession indicated the vehicle was declared uneconomical to repair.

In contradiction the report was said to have added: “This vehicle in question is, however, repairable, but we have elected not to repair the vehicle as we took the amount of time, availability of spares and the inconvenience to the client in consideration.”

Roux said the vehicle was not declared permanently unfit for use as a motor vehicle, referencing regulation 55 of the National Road Traffic Act.

“As BMW Fourways prides ourselves as ethical and custodians of the BMW Brand, the vehicle was removed from advertising sites and disposed of via wholesale channels,” Roux confirmed. 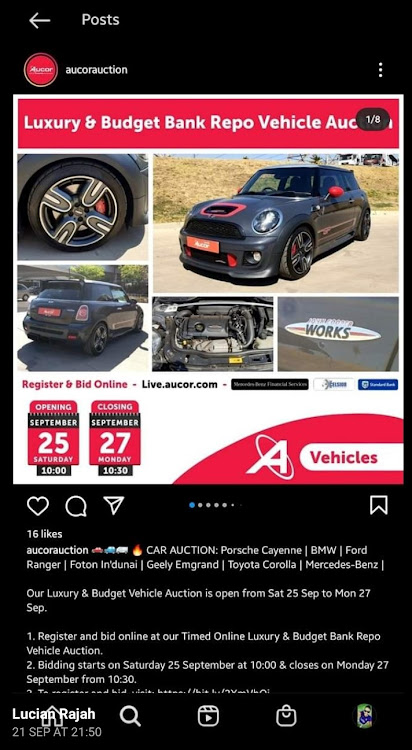 The vehicle resurfaced yet again, this time as part of a line-up by auctioneering firm Aucor.
Image: Supplied

Rajah claimed in a Facebook post on September 21 that the vehicle resurfaced yet again, this time as part of a line-up by auctioneering firm Aucor. An image from the original listing displayed the vehicle identification number (VIN).

“The vehicle passed a full diagnostic report at Dekra. This was done prior to new ownership and at our cost.

“The purchaser was fully informed and signed declarations of the assessor report, agreement of loss (insurance document) and there are now comments on the BMW system.”

An update to the comments section means prospective buyers digging into the history of the vehicle would be aware it had been previously damaged and repaired.

Organisations including the SA Motorbody Repairers’ Association (Sambra) have lobbied for vehicle insurers to form a public register of vehicles that have been written-off.

In a November 2020 release, Sambra said public access to a Vehicle Salvage Data (VSD) registry would be useful for potential used car buyers to avoid being unwittingly saddled with “death traps on wheels”.

Countering this, however, is the argument that releasing such information would be in contravention of the Protection of Personal Information Act.

Addressing the prospect of a public database, the SA Insurance Association said it wanted to protect policyholder information.

TransUnion Africa previously offered a service where buyers were able to see if second-hand vehicles were written-off, but this is no longer the case.

Reporting on a similar Consumer Watch matter last year, we reached out to the company's vice-president of automotive information solutions, Kriben Reddy, to ask why.

“We source data from multiple sources to produce our vehicle verification report. We used to receive previous accident information from a specific data supplier, but unfortunately our agreement with this supplier has ended.

“Until we can source verifiable data again we are not able to provide this information. Consumers can still establish whether the car is the correct model, any outstanding finance, mileage and whether it is listed as stolen.”