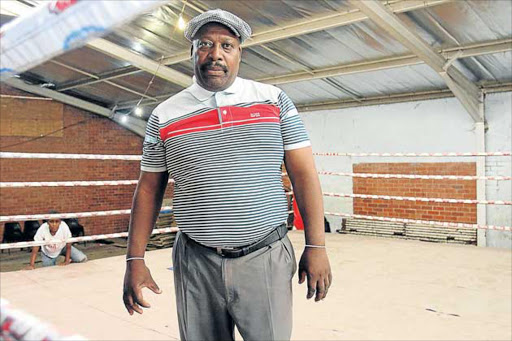 GOOD HEART: Vuyolomzi Mtekwana has produced professional boxers and world champions at his NU8 gymnasium, where children are coached for free every day after school Picture: SIBONGILE NGALWA
Promoting sport to children growing up in an era when there are few playgrounds and drugs are sold on every street corner is not easy, but Vuyolomzi Mtekwana has committed his life to keeping youngsters off the streets.

Mtekwana, who works for the department of education as the co-ordinator for sport and music at the Rubusana district office in East London, spends his afternoons teaching boys and girls how to box at the Sisonke Boxing Gym in NU8.

Children from the age of 10 are coached from 3pm to 6pm every day, at no cost to their families.

Mtekwana was nominated as a local hero by Mfuzo Dyira, a professional boxing trainer in Grahamstown.

“The gymnasium has produced district, provincial, national and international boxers, as well as Olympians and world champions, under his management,” said Dyira.

“I feel that his work has not been recognised because he doesn’t get anything out of what he is doing.

“There are many professional trainers who get paid but do not go to the same extent to promote the sport nor their respective communities.

“ I really take my hat off to him for investing so much of his time to empower and educate children about the ins and outs of boxing and other opportunities.”

Mtekwana has been running a programme under the Eastern Cape Amateur Boxing organisation, to empower about 20 boxers through training, skills development and education.

“Under the programme, we are grooming boys the Commonwealth Games, even the Olympics, but to steer clear of professionally until they have been educated properly and matured,” he said.

“Boxers see money and get excited, having no ambition to do anything else, and that is what we are trying to change.”

Mtekwana said children taking part in the programme had been enrolled at colleges but so far none of them had completed their courses.

“These children are hungry for money and lose focus just when we think they can see the bigger picture; at times we are discouraged, but we still continue to preach.”

The father of two bought a boxing ring, which he leases out to professional boxers to cover the cost of coaching his amateurs.

“As a scholar, born and bred in Mdantsane, it was difficult to escape the vibe of boxing.

“While I was at school...the sport was very competitive because everybody was a boxer.

However, Mtekwana said that due to his commitment to his studies and political activism he could not train as much as other boxers did.

He never pursued professional boxing, but graduated from the University of the Western Cape in 1987 with an education degree.

“I never had time to train but I have always held the sport close to my heart, which is why I am doing what I do.” — mbalit@dispatch.co.za