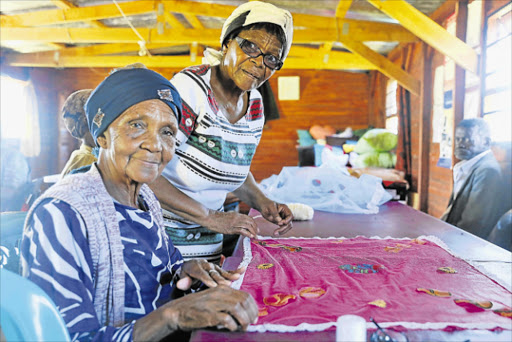 HELPING EACH OTHER: Nombulelo Pikoli with the founder of Emthonjeni Wokuphila for the elderly, Ntombozuko Ndamase, right, at their centre in KwaMxhalanga village near King William’s Town Picture: SIBONGILE NGALWA
More than 50 elderly people from KwaMxhalanga village near King William’s Town wake up every day looking forward to spending time in a prefab structure that is the base of Emthonjeni Wokuphila.

For the last 13 years, former nurse Ntombozuko Ndamase, 68, has dedicated her days to this NGO, working with the elderly in the village, keeping them active with exercises, craftwork, singing and sharing their experiences with one another.

For the more sprightly among them, there is plenty of gardening to do as well.

As founder and director of the centre, Ndamase said when she retired from nursing in Grahamstown she felt the need to offer her services to the elderly.

“At the time, there were many stories of old people being killed in the Transkei, accused of being witches. I didn’t want that in my community. Some of those who lived alone were being abused by their grandchildren,” she said.

“My compassion and the fact that I am a woman of God makes me want to help the elderly. I wanted to shine a light in my community.”

Along with the help of four caregivers, Ndamase also provides the elderly with two meals every day – breakfast and lunch.

A mobile clinic visits the centre once a month, bringing the senior citizens their chronic medication so that they do not have to queue at the community clinic.

On the day they receive their pension grants, those who need assistance are accompanied to the venue.

The four untrained caregivers also visit other elderly people in the community who are housebound, to assist with whatever needs they have, such as taking medication, cooking and laundry.

Lunch, which is cooked at the centre, is also delivered to them every day at 1pm by the caregivers.

Nolulamile Mdaka, 70, said she preferred being at the centre to being alone and lonely at home.

“I love being here because I forget about my problems. I think about my son a lot when I am at home because I get lonely. He was stabbed to death in Cape Town but the worst is that I never got to bury him.

“I never got a chance to say goodbye just for the closure. Being here keeps my mind off things,” she said.

Thursday is field day at the centre, and everyone who is able to, visits elderly folk in their homes, where they conduct short prayer services for them. Thursday is also the day they visit schools in the area and share their wisdom with the pupils.

The National Lotteries Commission made their work that much easier when it awarded them a seven-seater Toyota Avanza last week, so they could fetch people who would like to be at the centre every day, such as 88-year-old Nomilile Ntuli, who lives alone and has been part of the project since its inception. She is ecstatic about the new vehicle.

“I came here when the project first started. Being here helps me forget all my worries and stops me from being lonely. Things are even better now that we have a new car. I will be sitting in the front seat!

“I have already called my children and told them that on cold and rainy days I will no longer stay at home doing nothing on those couches – I will be picked up in the new car.

“I love this place so much – everyone here loves each other and no one disrespects or undermines the other person,” she said.

The centre’s members are a lively bunch and, in 2015, even made it to the provincial Golden Games in Port Elizabeth.

The two-day event, where teams compete in a range of physical activities, is open to anyone over 60.

Ndamase said it was not easy running the centre as its members only paid a R50 fee each annually.

The department of social development did provide some funding, but most of it had to be raised.