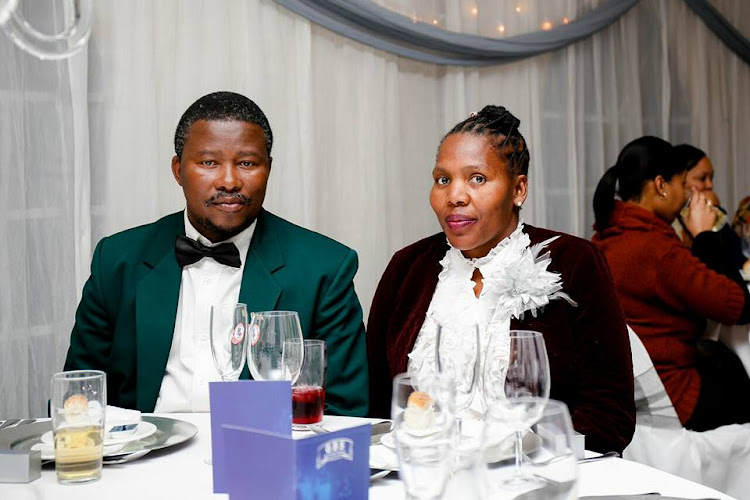 GUIDING BOXING TALENT: Mfuzo Majeke Dyira in his judge's blazer with his wife, Lulama. His Mfuzo Boxing Camp in Makhanda is home to 48 boxers.
Image: SUPPLIED

Makhanda local Mfuzo 'Majeke' Dyira has spent the better part of the past two decades teaching youngsters — and adults — the ins and outs of boxing.

In 1995, he founded the Mfuzo Boxing Camp. With female and male boxers ranging in ages from 12 to 40, the camp, situated in Joza, is a hub of exercise, fun and achievement.

“It's our mission to create champions and how to be good citizens of Makhanda. For children, it's easy to get involved in shady things. They make mistakes but here we teach them self defence in a constructive way,” said Dyira, 50.

“We started in October 1995 and did not look back; we've had great successes. Many of our boxers, both boys and girls, have competed locally, provincially and nationally.”

The father of four said it was his own love of the sport that had inspired him to start the camp.

“Boxing used to be a big sport in Makhanda. My uncle, Nombenqane “Kid Zaphule” Kotyi, was a prominent boxer. I remember not being allowed to watch all of his fights because I was still very young. I think I only managed to watch one.

“I loved it. Boxing used to be a school sport. I boxed while growing up, but never achieved my dreams as a boxer.”

The 35-year-old has subsequently been ordered by her doctor to withdraw from the fight which was to take place at Graceland Casino in Secunda on ...
Sport
1 month ago

Dyira said there were a few who, like him, missed the sport and wanted younger generations to learn the beauty of boxing. And so the Mfuzo Boxing Camp was born.

“I was involved in coaching soccer and after a while people approached me and said why not start a boxing programme. We all loved the sport and wanted to revive it. Some just missed boxing themselves and wanted somewhere to do it,” said Dyira, who was born and grew up in Makhanda.

Today the club has seven coaches and is home to 48 boxers, including newcomers to the sport and stalwarts, who train every day from Monday to Friday between 5pm and 7pm.

Daily boxing drills, self defence and good technique all form part of their daily training.

“We box in various categories, from cadet — 12 to 14 — up to seniors or elite which is 19 years and up. Everyone can compete up to national level,” said Dyira who is an International Boxing Association Star One judge-referee and an assistant coach at club level.

Mcotheli was dethroned by Dlomo by a unanimous decision in a fight which he believed he won clearly.
Sport
1 month ago

Working on a volunteer basis, the coaches, including Dyira, give their time selflessly in an effort to help the youngsters achieve their goals and go on to compete.

“Many parents prefer to invest in school activities rather than outside sporting activities. Though education is important, I think sport is equally important.

“We're giving the kids an opportunity to succeed in something else and a way to find and practise different talents,” said Dyira who has a banking diploma and works full time as a clerk at the GBS Mutual Bank.

“Seeing the kids in the gym and how much they love it just shows how important sport can be. The look in their eyes and seeing how eager they are to achieve, is what keeps us going.”

Women's boxing continues to struggle to gain prominence in SA and promoter Mbali Zantsi is hopeful that the sport will be given the respect it ...
Sport
2 months ago

“We'd like to see some of them become involved in the club as coaches or referees one day so with the help of community partners we run training sessions and other leadership training sessions,” said Dyira.

He said the biggest reward was seeing the achievements of many young boxers who had walked through the gym's doors.

“Making a change in our community is music to my ears. When you see the kids achieving so much you can't help but be proud and say to yourself: 'we have not wasted our time and we're playing our role in bettering our community'", Dyira said.