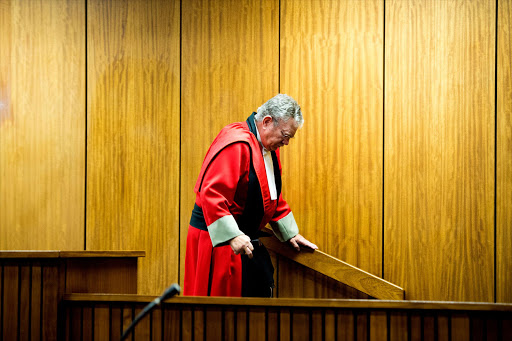 Two years of each of these sentences are suspended on the condition that he pays R100‚000 in total — R50‚000 for each count — to the registar of the court.

This money must be donated to campaigns aimed at ending the abuse of women and children‚ Bam said.

Hewitt was sentenced to two years in prison for indecent assault.

The sentences will run concurrently.

Hewitt was convicted in March of raping two of his former students‚ Twiggy Tolken‚ 47‚ and Suellen Sheehan‚ 45‚ and indecently assaulting a third woman‚ 37‚ who by order of the court cannot be named‚ when they were minors in the 1980s and 1990s.

Hewitt’s bail was extended to Tuesday after Bam postponed the case for a day to allow the defence to apply for leave to appeal.

Earlier on Monday‚ Delaille Hewitt sobbed in the witness stand as she begged Bam not to send her husband to prison.

Defence advocate Terry Price called Hewitt and his wife‚ who live on a small citrus farm near Addo in the Eastern Cape‚ to testify in mitigation of sentence.

"In my life I have faced adversity‚ but this one is unbearable‚" Delaille said as she wept.

The Hewitts both testified of their poor health‚ the state of house arrest they have been under since the allegations first surfaced and the fact that Delaille would not be able to run and live on their farm alone if Hewitt was imprisoned.

The court also heard that the Hewitts have assets to the value of about R10-million.

On the day Delaille first heard of the allegations against her husband in August 2011‚ she had just received her first round of chemotherapy for ovarian cancer. The treatment‚ which should have been concluded in three months‚ took six months because of all the stress she was under‚ she said.

" She cries all the time. She’s lost a lot of weight. She has no enthusiasm‚" Hewitt said of his wife.

Hewitt said his own health was "not good". He has a heart problem‚ has had a stroke and had both his knees replaced in recent years.

Hewitt also told the court that he had received ten anonymous letters‚ which were fraudulently signed by someone posing as famous tennis players‚ calling him a peadophile.

One of the letters instructed Hewitt "to take some vaseline with me to jail"‚ he said.

Price argued that this evidence must be considered by the court when handing down a sentence because it showed that Hewitt had already suffered some form of punishment preceding his conviction.

Price submitted that Hewitt should not serve time behind bars in light of his age‚ his poor health and the fact that his crimes were not violent in nature.

Prosecutor Carina Coetzee‚ however‚ said that no jail time at all would not be a suitable sentence considering the seriousness of the offences and society’s attitude to child abuse.

"The sentence must also deter like-minded people from committing the same crime‚" she said.