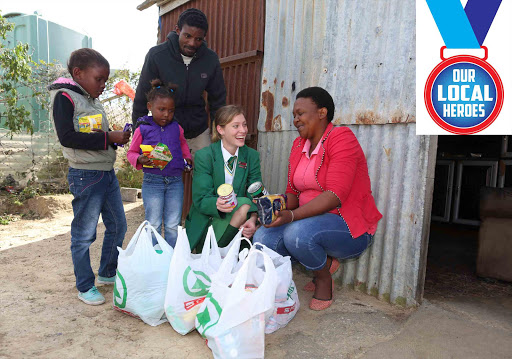 LoadsheddingGuy
A passion for bridging social differences inspired Danté Robberts to encourage her school to collect food, toiletries and clothes for a family of four in Scenery Park.

Danté, 17, a matric pupil at Stirling High School, first learnt of the family’s plight through a family friend after she told him she wanted to help less fortunate families.

Lungile Willie, 33, and his partner Noncedo Planga, 32, have two daughters – Liyavuya and Linovuyo aged 5 and 7. Both parents are unemployed.

Since January this year Danté has led a campaign at the school to offer the family support and help them create a vegetable garden at their shack in Scenery Park.

On Friday during the school’s assembly the family was invited to attend and emotions ran high as they relayed their gratitude to the hundreds of pupils in the school hall.

“Danté has been feeding us all year and supplying our children with clothes and every week when she comes, we know she is going to leave something for us,” said Planga.

“Thanks to her and the rest of the school, we now have a garden where we get fresh vegetables which we cook warm meals from.”

Planga said the family had been living off their children’s support grants as they had been struggling to get employment.

Danté said the whole school had assisted the family. “I am just the transporter, because the entire school has played a big role helping.”

She said she wanted to register a non-profit organisation called Feed Back Friday that would help support more families.

“A class has committed to collecting some items for the family and on Friday I collect and take to the family,” she explained.

“None this could’ve been possible without the support of my parents who encourage me.”

“Danté came to me with her proposal to establish the Feedback Friday campaign at Stirling High and share her vision to mobilise the support of her fellow pupils in order to be able to support an indigent family who were totally destitute living in Scenery Park,” he said.

“I was singularly impressed with this remarkable young lady’s ideas and her plans to implement them.

“She is a veritable social entrepreneur and a person of action. To her it is not important to make money but to rather make a difference in the lives and circumstances of indigent and less fortunate people.”

Foster said pupils had been supportive of Danté’s appeals.

“She has more than once received a standing ovation during our school assemblies. We are all extremely proud of her and in particular the sound values that she exemplifies.” — mbalit@dispatch.co.za