Choir out to make the province proud 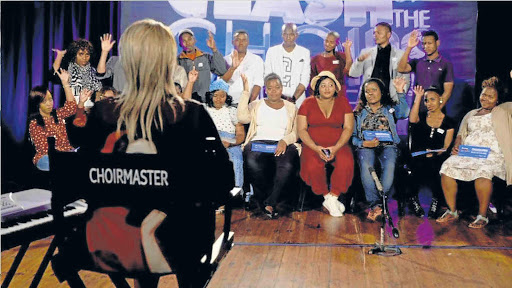 STRIKING A CHORD: Award-winning singer Bucie Nqwiliso will be leading team Eastern Cape in Season 3 of ‘Clash of the Choirs’. Bucie introduced her team of 18 singers on Mzansi Magic channel last Sunday Picture: FACEBOOK
Eighteen talented singers selected to represent the Eastern Cape in this year’s reality TV show Clash of the Choirs have vowed to make the province proud after being the first team to be booted out of the competition last season.

The lucky 18 contestants, comprising six men and 12 women, impressed during the Clash of the Choirs Season 3 auditions held in East London on October 3.

Choirmistress Nqwiliso was assigned to mentor the group after she randomly picked their name out of a hat under the Eastern Cape region.

The choir made its debut on DStv’s Mzansi Magic channel last Sunday.

Nqwiliso is one of seven choirleaders, who will coach the seven choirs gunning for the grand prize of R1-million, “with an additional R250000 being donated to a charity organisation of their choice”.

Rapper Ifani will tomorrow showcase his choir from the Western Cape and musician Busiswa “Kalawa Chikita” Gqulu will introduce her KwaZulu-Natal choir.

Speaking to the Saturday Dispatch this week, Eastern Cape team member Pearl Sonjica, 25, who was one of the first to secure a spot in the choir, said she was proud to be part of the team.

“Since we appeared on TV on Sunday we really have been getting messages of support from the Eastern Cape people.

“I would like for our home province to continue to be proud of us and keep supporting us. We have a team that will put our province on the map,” Sonjica who is from Middledrift, said..

“I am an alto and so far on the show people have not really seen what we are capable of. From the choirs that I have seen so far on TV we are the strongest team,” Cakathiso said. Choir leaders Ifani and Gqulu said they would have loved to represent their home province, the Eastern Cape.

“I would have liked to represent my home but it is a competition and I am seeing this as a challenge,” Ifani said.

Gqula said she was looking forward to representing KwaZulu-Natal.

“They have nice vocals. I have more females than males in my team,” she said.

The Saturday Dispatch was unable to get comment from Nqwiliso at the time of writing. — mamelag@dispatch.co.za