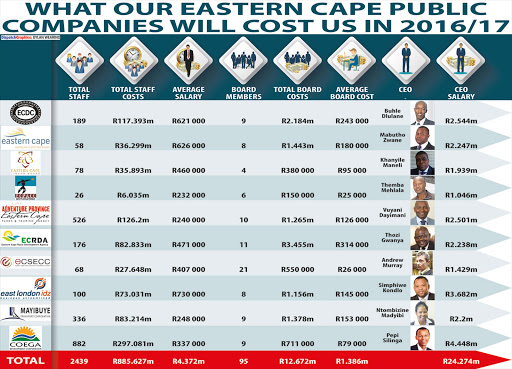 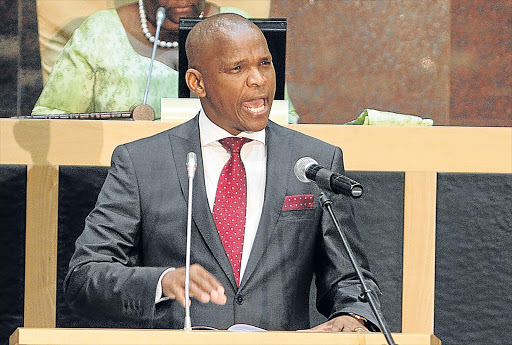 Staff at Eastern Cape state-owned companies and regulatory agencies are among the highest-paid workers in the country.

In the new financial year, which starts on April 1, the provincial government will transfer R1.1-billion to the 10 entities it owns, of which R812-million goes directly to staff and board member costs. Staff at some provincial agencies earn well over R500000 each a year.

The average salary at the East London Industrial Development Zone (ELIDZ) will be R730000 over the next financial year, making it the best-paid government company in the province and guaranteeing its staff more than double what ordinary provincial civil servants earn.

But the highest-paid employee across any entity is Coega Development Corporation chief executive Pepi Silinga, who will earn a whopping R4.448-million over the next 12 months.

Finance MEC Sakhumzi Somyo, who has initiated a study of the various provincial entities, said this week: “The amount is huge. The study must tell me why is it like that.”

Four of the entities – the two IDZs, the Eastern Cape Development Corporation (ECDC) and the Mayibuye Transport Corporation – are designated as government business enterprises.

Details of the huge transfers for staff costs are in documentation presented in the annual provincial budget speech in the Bhisho legislature last Friday.

National Treasury has initiated a review of all state-owned entities, which range from libraries and regulatory boards for various professions and industrial sectors, to development agencies and large corporates like Transnet and South African Airways.

Of the provincial review, Somyo said this week: “The report should tell us what each entity is supposed to do and whether there is any justification .

“When we finish the study, it will unravel a number of issues inclusive of this one .”

The MEC was reluctant to compare salaries in state-owned entities with average wages in the province.

“The amount earned by each of those CEOs will only be arrived at when we have finalised these kinds of assessments.

“ indeed might be something which is unbearable but on the basis of each assessment I’ll be able to conclude whether there is justification.”

In his budget presentation last week, Somyo allocated R45.261-million to the province’s 144208 civil servants, averaging R313000 as a total cost to government per employee for the next financial year.

This would place most government employees in the top 1.3% of salary earners in SA, according to average wage figures for 2015 produced by Statistics SA.

Salary scales in the private sector vary widely, according to figures reported by staffing companies.

Administrative and office support workers can earn from as little as R72000 to R350000 a year, while highly qualified engineering and finance professionals can earn more than R500000 a year.

Only the top 10% of local CEOs earn more than R2-million a year, most of it attributed to share earnings, which are unavailable in the public sector.