R530-million of unspent EC budget meant for poor schools given to other provinces. 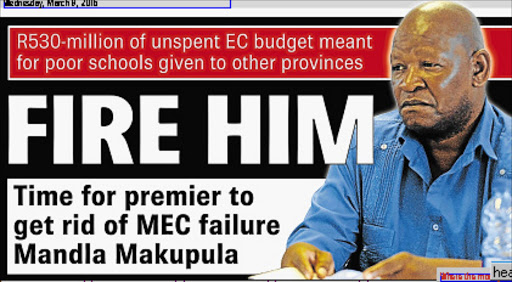 This is according to stakeholders who have called for heads to roll after it emerged the department failed to spend R530-million meant for school infrastructure.

The ANC has also demanded “consequences” for the department’s bosses.

The national Treasury has now reallocated the money which had originally been earmarked for building schools, revamping old ones, providing furniture and maintaining existing school infrastructure.

Of the R1.59-billion given to the department of education last year, 33% was not spent.

The Treasury announced in a Government Gazette on Monday that the R530-million would be given to Gauteng (R400-million), Limpopo (R80-million) and the Western Cape (R50-million).

ANC provincial secretary Oscar Mabuyane told the Daily Dispatch yesterday that the party had already demanded answers from the “entire leadership” of the department.

National Treasury spokeswoman Phumza Macanda said the money had been re-allocated “because it was not utilised by the Eastern Cape education department”.

The Daily Dispatch has repeatedly reported on the poor state of many Eastern Cape schools.

Some are falling apart due to poor infrastructure while others have not received furniture for years.

In many cases pupils are forced to bring their own chairs to school or use boxes or even beer crates as seats. Others continue to study from mud classrooms.

Mabuyane said the fact the money had not been spent was “not acceptable”.

“This undermines ANC decisions that education be made a priority. Our people need schools, and when money is given to build schools, schools must be built and if that is not done there must be consequences,” said Mabuyane..

“We will never be content with that gross under-performance at a point when our people expect so much from the ANC.”

Non-governmental organisations such as Equal Education and the Centre for Child Law (CCL), as well as union the National Professional Teachers Organisation of South Africa (Naptosa) and opposition parties, yesterday said they want the leadership of the Eastern Cape education department to be held accountable.

Cameron McConnachie of Equal Education said: “Underspending on the grant is inexcusable after so many years of slow infrastructure rollout, and with such a massive need for infrastructure in the province.

“It is an absolute travesty that the funds have not been spent. Heads should roll.”

The announcement comes barely eight months after the CCL went to court to force Makupula’s department, as well as the Department of Basic Education, to fix five dilapidated “mud” and unsafe schools after the national and provincial departments reneged on a court-sanctioned agreement.

In August 2013 the CCL and the five schools – Samson Senior Primary in Libode, Sirhudlwini SPS in Mt Frere, Ncincinikiwe Junior Secondary School in Butterworth, Melibuwa SPS in Dutywa and Gqeyane SPS in Tsolo – reached an agreement with the two departments to speed up the eradication of “mud” schools in the province.

This was going to form part of the Accelerated Schools Infrastructure Delivery Initiative (Asidi).

Instead the department only fixed the five schools and no others. In 2014, the department said there were about 350 “mud” schools, which left thousands of pupils learning under unsafe conditions.

Despite committing to decrease the number of these unsafe structures, there is little to show for it.

McConnachie said: “Mud schools have still not been eradicated.

“The money could also have been spent on maintenance of existing infrastructure.”

He was referring to schools such as Southernwood Primary, which was last renovated 20 years ago.

The school’s plea for additional funding to replace their shutter-board classrooms has not been acted on for the past 10 years.

Southernwood Primary School principal Michele Rothmann said last year the department had instructed the school to accept disabled learners as it had been declared a full service school.

“However, there has been no infrastructure to support the physically disabled children that the school had to accommodate,” said Rothmann – adding that they have 40 disabled pupils at the institution.

Basil Manuel, the executive director of Naptosa, said he was shocked and disgusted at the department’s failure to spend the money.

“It is letting our children in the province down.

“This is the province with the single largest deficit in infrastructure.

“It is not only the shortage of classrooms, but also aging infrastructure.

“It is the only province that still has mud schools,” Manuel said.

The DA’s Bobby Stevenson called for action against those who failed their in doing their duties.

“Fairness demands the premier (Phumulo Masualle) must make an example of these officials. Heads must roll,” said Stevenson.

“There are over 600 schools in this province that lack water, electricity and sanitation.

“This money would have gone a long way to assisting some of them put the indignity of pit toilets behind them.

“Thousands of learners must continue to suffer at the hands of inefficient bureaucrats.”

Provincial government spokesman Sizwe Kupelo would only say that the premier held meetings with all accounting officers “to raise his grave concern about non-implementation of executive decisions and warned that slow pace of service delivery will not be tolerated”.

He would not elaborate.