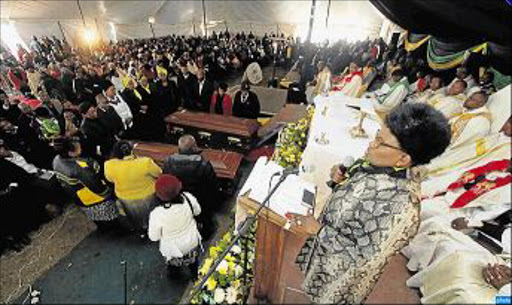 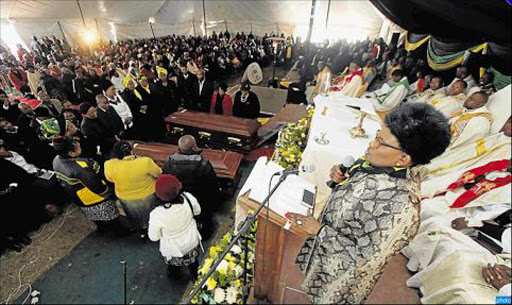 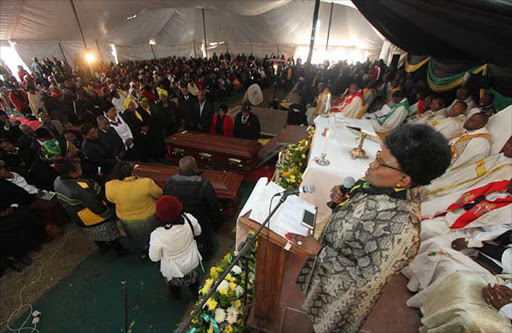 Elders and traditional leaders have lamented that greed and infighting among the ranks of the ANC, which has led to bloodshed over lucrative positions, is an insult to the trailblazers of the organisation and is causing a deadly rot in the party.

AmaMpondomise Royal Council chairman Peter Madasa and others from the Eastern Cape House of Traditional Leaders were speaking at the funeral of assassinated ANC leaders Zolile Malangeni and his wife, Ntombovuyo, at Mayaluleni village near Tsolo on Saturday.

Malangeni, a branch chairman, was touted to be the speaker of the Mhlontlo municipal council and Ntombovuyo was coordinator of rural development in the municipality.

Two weeks ago, they were gunned down in front of their two-year-old granddaughter.

The ANC donated a large tombstone as memorial of the two fallen comrades.

The ANC’s OR Tambo region has been characterised by factionalism, parallel ANC structures,

In his address, Eastern Cape House of Traditional Leaders chairman Chief Ngangomhlaba Matanzima warned the ruling party that if the battle for positions was not addressed, “'bloodshed will be the order of the day within the ranks of the ANC.

The brutal killing of the ANC couple here is a clear indication that today’s politics are infiltrated mainly by obsession for personal and financial interest, greed and disrespect of human life.

“Trailblazers and leaders such as Nelson Mandela, OR Tambo, Albert Luthuli, Water Sisulu, Govan Mbeki are turning in their graves seeing the hatred and greediness among ANC members today.”

OR Tambo mayor-elect and Salga provincial chairwoman Nomakhosazana Meth said:: “These comrades were of the most qualified, highly disciplined cadres of the movement. Their death is a loss to the organisation.

Social development MEC Nancy Sihlwayi said: “Some comrades are gradually shifting from the genuine political intent and have a tendency of advancing selfish interests. You do not kill other people because you have not been chosen. The legacy of our liberation is embedded in the human rights tradition of the ANC.”

According to Sihlwayi, criminals and the greedy were targeting individuals deployed as speakers in Mhlontlo.

“There is thus a masked individual who apparently feels aggrieved for not being the one deployed as a speaker in Mhlontlo and wants to eliminates those deployed to that office,” she said.

The Malangeni’s oldest son, Khanyiso, said: “'My parents have been brutally killed while trying to reshape the socio-economic and political landscape of this country. That was their sin.”

The new Mhlontlo councillors will be swornin tomorrow with the new mayor likely to be Nompumelelo Dywili.

Other incidents of internecine violence to hit the area include:

lANC former regional leaders and councillors – former OR Tambo deputy mayor Thadenkile Sabisa and Lawrence Mambila – face charges of conspiracy for the murder of former Mhlontlo speaker and OR Tambo regional chairman Xolile Nkompela (who was not injured, but his bodyguard died).