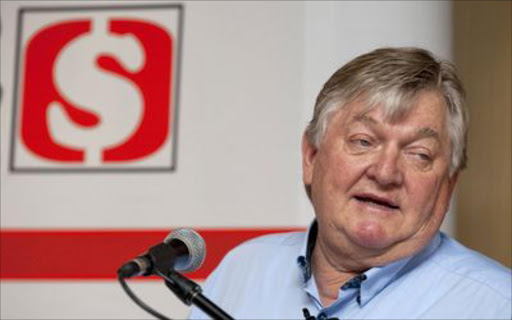 Some workers joined the march dressed in their red Shoprite work T-shirts to express their frustrations over working conditions at one of the country’s biggest retail store chains.

“That is so bad because if I compare my salary and his‚ it’s not the same‚” said one of the workers. “He is my boss‚ but‚ at least‚ if I could receive R1000 a week if I worked 40 hours it would be better. I heard that he is saying he is giving his employees R4000 a month‚ but it’s not true. For a temporary worker the maximum pay is R3000‚ that is if you worked maximum hours.”

Shoprite workers were this week alarmed when the company’s annual report revealed that Basson’s remuneration included R49.7-million in basic pay for the 12 months up to June‚ in line with the previous year‚ and a one-time R50-million performance-related bonus. This was because he achieved a trading profit growth of 15%‚ above the internal target of 11%‚ the retailer said.

“We get paid little money. (For) a week you get R500 and that is not enough‚” said one of the workers. “They don’t treat us right at Shoprite. When your shift starts at a certain time‚ usually we get there 30 minutes early‚ but you are asked to remain an extra hour after your shift but there is no extra pay for that.”

The workers also complained about their prospects of getting permanent employment.

The protest by Cosatu-affiliated unions is a call for a decent wage and to raise awareness about the plight of the workers in various sectors in the South African economy.

The workers will march to the City of Johannesburg’s chambers‚ the SA Chamber of Mines and the provincial departments of human settlements‚ roads and transport‚ and and finance.