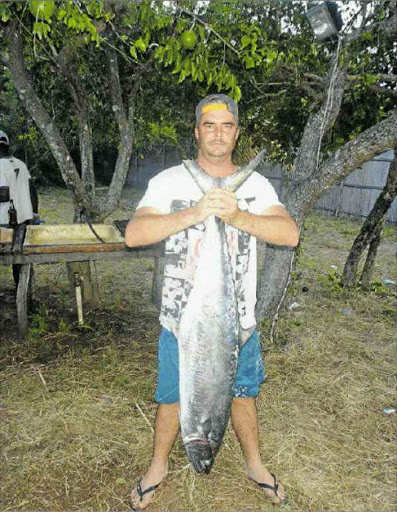 There has been outrage and condemnation after images of the rare, large deepsea fish being held aloft went out on Facebook.

Shepard, 38, said he did not know wreckfish were prohibited.

A source close to the Department of Agriculture, Forestry and Fisheries (Daff) claimed there was a high-speed bust of an unnamed skiboat angler off uMngazana, but Shepard denied being part of any such chase

He said he was pulled off the road as he was driving away from uMngazana with his boat, Sea Shepard.

Now a Durban businessman, he said he had raced all over South Africa, but had been going to uMngazana on family fishing holidays since he was eight. He got married there three years ago “with locals” attending.

He denied being a commercial fisherman operating under the guise of a recreational angling licence, saying: “I don’t sell my fish.”

He said he was 13km out of uMngazana, when he was flagged down by two fisheries officers and two policemen who checked the fish hatches on his boat.

They found the wreckfish but “could not identify them”. He had to offload the fish twice while the officers photographed them.

However, he had stopped in Port St Johns “to have a pizza” when three fisheries vehicles pulled up and “eight people” got out and again began to try and “identify the fish”.

“If I thought they were prohibited, I would have raced home. I never tried to hide them,” he said.

He was then informed the fish were prohibited, was arrested and held at the PSJ station until 11.30pm.

His rod and the wreckfish, weighing 22kg, 16kg and 13kg (gutted) were confiscated.

Shepard said the wreckfish did not appear on the list published on the website of the Department of Agriculture, Forestry and Fisheries (Daff) and when he got home he looked it up and found it in the 1998 “constitution” (gazette).

“It is so hidden and vague. Everyone along the whole coastline, me included, have been catching these fish for years including commercials.

“We catch them all the time.

“You can buy them in fish shops. We know them as moustache or contour rockcod.”

He said more wreckfish were being caught because of new braided line which allowed ski-boat anglers to fish at a depth of up to 200m.

He denied having any secret hatches or that he had been fishing in the Msikaba marine protected area. “I was 10km off uMngazana river mouth. I don’t go there to rape the ocean.”

To prove his innocence he said: “I will do a lie detection test. I will do it with pleasure.”

He said ski-boat anglers had been launching off uMngazana mouth “since there were wagon wheels”.

Daff spokeswoman Bomikazi Molapo has declined to comment on the raid, saying Daff was one of a number of stakeholders taking part in the joint Operation Phakisa.

“We are not at liberty to divulge any information about this ongoing operation,” Molapo said.