Men and women in blue honoured for excellence 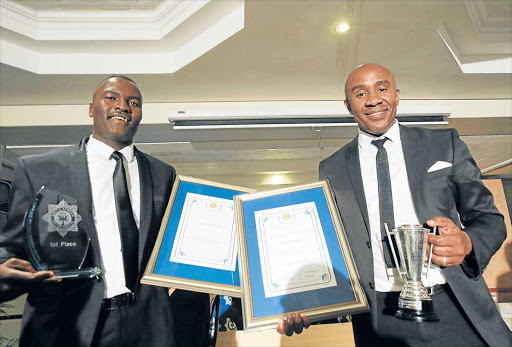 TOP HONOURS: Mdantsane detective Sergeant Phuthumani Kwenene (best detective) and Mdantsane police spokesman Captain Nkosikho Mzuku (police communicator of the year) were all smiles at the Regent Hotel Picture: SINO MAJANGAZA
A handful of men and women in blue, including patrol officers, detectives, administrative staff, a communicator and even messengers, were recognised for their hard work at the Eastern Cape SAPS annual excellence awards held at the East London beachfront on Friday.

Among the deeds lauded were successful convictions, bravery and the rescue of a young Mdantsane girl kidnapped by her nanny to Mozambique.

East London K-9 Warrant Officer Kilian Steyn was bestowed with the Gold Cross for bravery. This was for the effort he made when he shot dead an armed robbery suspect on April 7, 2014 near Leaches Bay just outside East London.

The suspect had earlier attempted to kill Steyn by shooting him below the heart but a bullet-proof vest saved his life.

Others were honoured for simply making the SAPS work efficiently.

The ceremony also gave hundreds of officers gathered at the conference hall of the Regent Hotel a rare glimpse of the new provincial police commissioner Lieutenant-General Liziwe Ntshinga.

The commissioner gave a shout-out to provincial State Security Agency boss Zannia Molelo for helping her quash the #FeesMustFall protests in the province. Ntshinga said with the help of her deputy, Major-General André Swartz, the crime tide in the Eastern Cape was turning.

“Those awarded tonight will restore confidence in the community. This year we have also increased the number of nominees to include those employees whose hard work is not recognised because they serve in the back office,” Tikana said.

Tikana urged Ntshinga to take the war directly to drug dealers and those responsible for taxi violence. She said murderers and rapists of women and children should not be spared.

Tikana concluded her speech by offering four sheep to the SAPS choir, which was bestowed with the provincial commissioner’s good ambassador award.