Experts say ‘umlungu’ is not negative in meaning 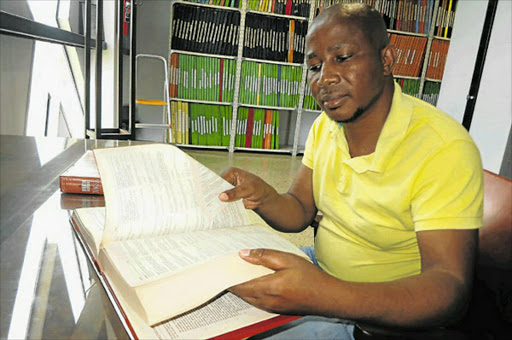 UMLUNGU: Zola Wababa, director of the University of Fort Hare IsiXhosa National Lexicography Unit, pages through and finds the word ‘umlungu’ in his unit’s definitive Greater Dictionary of IsiXhosa. Picture: MIKE LOEWE
UMLUNGUS are from Europe or Pondoland – and that is official.

Last week, the meaning of the Xhosa word used for decades by black people to identify white people, and adopted by many whites after 1994, came under scrutiny after a racial fight in East London.

Gearbox and tow garage owner Roy Pape said he only let fly with the racist “k” word and more when Thobela Macozoma, a former police sergeant and founder of the Well of Bethesda church in Beacon Bay, allegedly called him umlungu.

Both laid charges of crimen injuria. Pape claimed: “If I am an umlungu then he is a k****r.”

Ironically, Macozoma denied calling Pape an umlungu but admitted to calling him a boer during their argument.

Many white South Africans believe umlungu is a derogatory term referring to “scum of the sea”, while others believe it simply means “white person”. This prompted the Dispatch to look into the origins of the word.

Zola Wababa, director of the University of Fort Hare-based IsiXhosa National Lexicography Unit, the legal custodian of the language, read the definition from the unit’s hefty Greater Dictionary of IsiXhosa.

An umlungu is, firstly, “a white person ”, and secondly, a “member of the abeLungu clan descended from whites shipwrecked on the Pondoland coast circa 1700 and absorbed by the Pondos ... ”

He said the word was coined during a time of colonialism and apartheid oppression but “semantic extension” has seen it being used in “polite or rude ways”.

“Words are just letters – it is the emotions attached to them by us humans which give them their power for good and evil,” he said.

“There is no history of the word being associated with white scum or foam from the ocean,” he said.

Today “ama-BEE” and “umlungu” are terms used interchangeably by people in townships and from rural areas to describe a black or white boss with power and money.

In an argument, umlungu became a derogatory term, but in friendly banter among Africans it was used with warmth, said Wababa.

Umlungu could be used “in a pejorative way.

“The k-word was always derogatory, unless it is used by a black person to another such as the African American’s use of the word ‘nigger’ among themselves as slang,” he said.

“Language doesn’t create the holocaust, apartheid, or racism – it is humans who do that. Language simply underpins the attitude.

“Words such as these become loaded terms when we are suffering from socioeconomic and political tensions which have a tendency to play themselves out racially.”

The provincial Department of Sport, Recreation, Arts and Culture said the “k word” was “offensive and vile” and urged peace-loving South Africans to not use it.

But spokesman Andile Nduna said umlungu had “no offensive or derogatory meaning whatsoever”.

“There are black people who refer to other black people as ‘umlungu’, a reference most often made in recognition to social standing and affluence.”