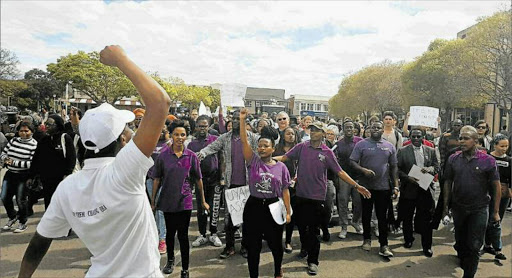 The interim interdict prohibiting protesters at Rhodes University from unlawful behaviour, including intimidating, kidnapping and assaulting others, was today dismissed almost in its entirety.

The Grahamstown High Court confirmed the interdict, in an abridged form, against only three named students, Sian Ferguson, Yolanda Dyantyi and Simamkele Heleni.

While Judge Murray Lowe found that the university had suffered some infringement of its rights and that it had shown a reasonable apprehension that in the absence of an interdict this would continue, he said its identification of those groups responsible had been absurdly wide.

“A court does not grant relief in circumstances where there is reasonable uncertainty about what that order means, or to whom it applies.”

He said the relief sought was also too wide.

Lowe described the relation between the defined groups and the activities they actually intended to interdict as “considerably vague as to what this might or might not include”.

The university sought the interdict in April at the height of anti-rape protests during which a list of names was released on social media of men alleged to have committed sexual assault against women.

The publication of the list resulted in some men on the list being kidnapped and held against their will by protesters.

Lowe said that the kidnappings, the barricading of roads and destruction of university property were unlawful activities beyond the protection of the constitution.

He said the university had shown that the three women had been involved in some unlawful conduct, the university was entitled to a final interdict against them.

He said the university had shown that the three women had been involved in some unlawful conduct that was not protected by the constitution and that it was therefore was entitled to a final interdict against them.