Another Ford Kuga bursts into flames 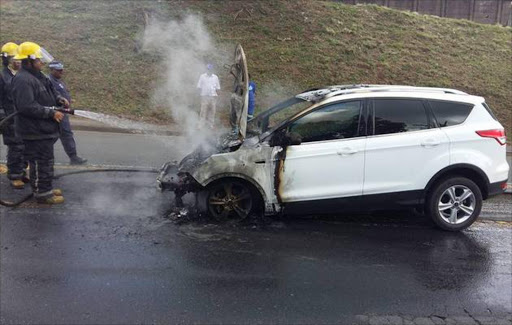 Ford Kuga sales drop by 50%
A Port Elizabeth family is in shock after their Ford Kuga burst into flames while they were driving through Gelvandale in a horrifying echo of a similar incident in Wilderness a year ago that left another Kuga driver burnt beyond recognition.

The Port Elizabeth incident in the early hours of Saturday will likely put more pressure on Ford‚ with a Facebook site of angry Kuga owners already set up and an estimated 38 burn-out incidents reported so far.

Maria Daniels‚ 47‚ her boyfriend Alton Jantjies‚ 46‚ her two children and a friend escaped uninjured‚ but it could easily have been much worse.

The SUV stalled and flames erupted from under the bonnet just as they were about to roll into a service station.

Daniels‚ a senior bank employee‚ bought the second-hand 2013 Kuga EcoBoost Titanium automatic with 68 000km on the odometer on December 9 from Ford dealer Eastern Cape Motors along the William Moffett Expressway.

She said she had heard about the problems with the make but was assured by the saleswoman that they had been assessed and the problems were related to motorists modifying their vehicles with gadgets not approved by Ford.

As a devout Catholic‚ Daniels‚ of Aspen Heights‚ had the car blessed last week and was due to set off on a trip down the Garden Route with her family.

However‚ they had to delay the trip after the car would not start on Thursday. Ford mechanics diagnosed a faulty battery and replaced it but Daniels‚ with the prior reported Kuga incidents in the back of her mind and their holiday pending‚ insisted they do a safety check as well.

“They came back saying everything was fine with the vehicle and I was happy that they had gone through it‚” she said. “Our plan was to leave early on Saturday morning.”

There were media reports this week about two other recent fire incidents involving Kugas.