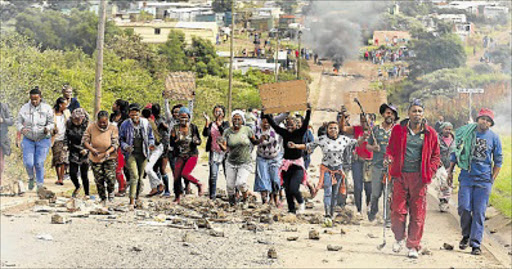 About 1000 Amalinda Forest residents clad in gumboots and warm clothes braved the rain to close off streets leading to the township from as early as 4am this morning.

Burning tyres and large stones were scattered along the street among other rubbish to barricade vehicles from entering and leaving the township.

Resident Mandilakhe Leleki, said the protest errupted after several deaths had occurred in the community due to illegal electricity connections.

"We are ached by recently burying a child who had so much to offer the world, but because of our terrible living conditions, he had to be caught up in the crossfire which isn't fair. If we all had electricity we would not be having such unneccesary deaths. We are concerned for our children, the municipality must do something," he said.

Law-enforcement officers and the police were seen calming the situation, just after 10am when the community was also addressed by recently appointed Ward 16 councillor, Mzukisi Relu.

Relu encouraged the community to form a delegation which would represent the community at large at meetings to be held with the BCM engineering and housing departments.

"The destructive protest came as a surprise to me because nobody came to discuss this with me as a burning issue, but they were quick to hit to the streets.

"We need to engage in discussions with all the stakeholders to find a solution on how we can get electricity in this community because it is a paining issue to all of us," he said.