Airline flies in to price storm 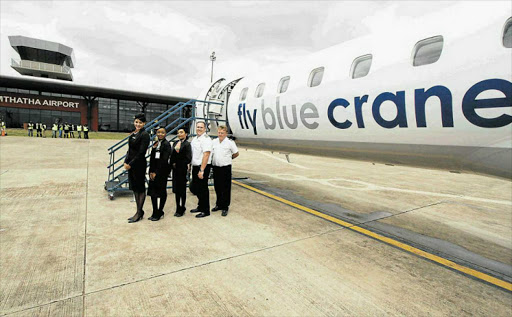 NO MORE: Fly Blue Crane has stopped operating its flights from Johannesburg to Mthatha Picture: LULAMILE FENI
Business people in the OR Tambo district have lodged a formal complaint with the Competition Commission of South Africa against SA Airlink over alleged anti-competitive behaviour.

This after the airline, which has been operating the Mthatha Airport to Johannesburg route, “suddenly” slashed its prices following the introduction of another airline, Fly Blue Crane, by the Eastern Cape provincial government late last year.

Fly Blue Crane arrived on the scene charging only R799 for a one-way flight, while Airlink offered a return flight for R4000.

Airlink provided two return flights per day between Mthatha and Johannesburg from Monday to Friday and one on Saturdays and Sundays. But when Fly Blue Crane appeared, Air Link suddenly introduced a third flight and slashed its return fares from R4000 to R2000. Airlink had been operating flights from Mthatha to Johannesburg since the government pumped in around R700-million towards the renovation of the Mthatha airport which included the construction of a R250-million 3km runway to accommodate larger aircraft.

Yesterday SA Airlink chief executive Roger Foster told the Dispatch: “We did not reduce fares. What we did do was to match the prices to defend our market”.

Competition Commission spokesman Sipho Ngwema yesterday confirmed to the Dispatch that they had received a complaint from the business chamber regarding the airline. “And it’s being processed,” he said.

The Daily Dispatch is in possession of a copy of the letter of complaint to the commission dated March this year from the OR Tambo district chamber of business.

In it the chamber alleges that Airlink suddenly reduced its prices to less than half after the introduction of Fly Blue Crane last year. “To us this means we have been exploited in this region for many years by SA Airlink, being charged exorbitant prices for air-fares, while in fact they knew that the real price was less than R2000 but they were charging more than R4000 all these years for return tickets. “Please investigate this for us as we want compensation as these high prices even scared investors away from this region.”

He accused the airline of killing the economy of the district.

The commission could not be reached for comment at the time of writing yesterday.

Foster confirmed the complaint against them by the business chamber to the commission. He defended the airline, saying when a competitor arrived with reduced prices, they matched those prices, something which was allowed by the commission.

Commenting on the decision to introduce a third daily return flight following the arrival of Fly Blue Crane, Foster said that was spurred by the downgrading of the airport to a category 4, which meant it could no longer accommodate their 85-seater airbus. As such, they had resolved to increase their frequency.

“That had nothing to do with competition,” he added. — sikhon@dispatch.co.za