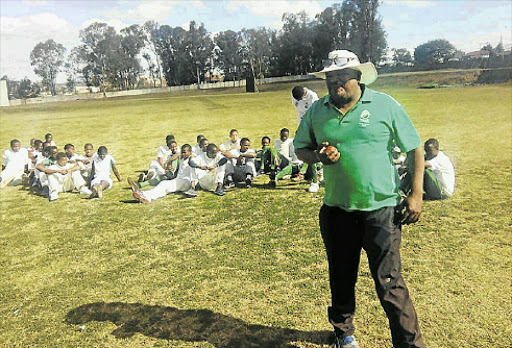 ON THE PROWL: Lawrence Mahatlane, who is the South African under-19 cricket team coach, spent the past week in Mthatha scouting for potential cricket players. He is seen here with youngsters at the Khaya Majola Cricket Oval in Mthatha
South Africa’s U19 cricket coach was “blown away” by the talent he found in OR Tambo’s rural areas this week.

The culmination of the week was a meeting with all the coaches involved, when he spent the morning giving his input on how they could improve the teams and hone the skills of their players.

Speaking to the Daily Dispatch Mahatlane said his visit was to see first-hand the talent the province had to offer and to understand what challenges the rural teams faced.

“But I also want to play a role in motivating both the players and their coaches and just encourage them to keep at the game despite their challenges,” said Mahatlane.

He says from what he has observed the players he has seen are talented.

“It’s good to know that there is talent but the scary part is that those with clear potential need nurturing and time,” he said.

The most glaring challenge was the state of the facilities and lack of equipment, he emphasised.

“Khaya Majola Oval is beautiful but of all the spaces I have seen this week it is the only one that looks good.

“That means many tournaments or events are held there but that poses an expense and logistic challenge for teams coming from far off, like Port St Johns or Mount Ayliff,” said Mahatlane.

He believes that the coaches do not get enough recognition.

“The biggest thing for me was to see how passionate these coaches are.

“Their commitment to the game and to the kids is really admirable because talented children need someone to believe in them and these coaches really go the extra mile.

“Many of them even end up using their own money just to get their players to tournaments,” he said.

Mahatlane said he had begun soliciting assistance from his own counterparts to provide support for the Kei Cricket teams.

“I hope to return in a few months with some equipment and kits. I am calling friends and starting a collection even if it is secondhand stuff because many of these children play barefoot and I want to do something about that,” said Mahatlane.

Kei Cricket general manager Lefty Ngece said there were two girls who made the SA U17 team last December and he wanted a chance to tell Cricket South Africa that there were more where those girls came from. — ziphon@dispatch.co.za