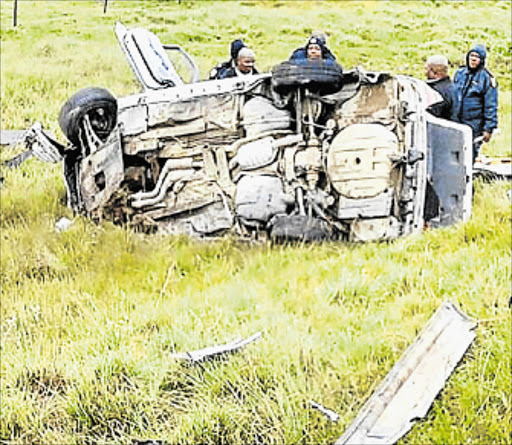 CRUSHED: An accident scene in Nonkcampa outside King William’s Town yesterday morning Picture: SUPPLIED
Police are offering a R50 000 reward for information that might lead to the arrest, successful prosecution, conviction and sentencing of Bluewater farmer Jason Winrow’s killers.

Winrow was killed on his farm on July 29 in an incident that sparked more fears of farm attacks in the Eastern Cape. His lifeless body was found at his front gate with two gunshot wounds and a stab wound.

The suspects fled with Winrow’s Hilux bakkie, a wallet and a cellphone.

Four months after his brutal murder, police are yet to make an arrest, opting to offer a R50000 reward.

Provincial police spokesman captain Khaya Tonjeni said: “Jason Winrow arrived at the gate of his farm and as he alighted from the vehicle to open the gate he was accosted by unknown suspects who shot and stabbed him. The suspects fled with his vehicle. Murder and armed robbery cases were opened and are under investigation.”

The spokesman said the deceased’s vehicle had not yet been recovered.

“The vehicle has a black snorkel on the right front of the vehicle and a silver galvanised cattle rail on the load body.”

Tonjeni called on anyone who might have information regarding the whereabouts of the suspects to come forward.

“All the information will be treated with the highest confidentiality,” Tonjeni said.

lTwo people were killed while a third is fighting for his life at Grey Hospital after two cars collided head-on on the N2 near Nonkcampa village outside King William’s Town yesterday morning.

Tamara police opened a case of culpable homicide after a silver BMW and a white KIA Sportage collided in the early hours.

While the cause of the accident is still unknown, it comes just a day after the department of transport issued a rain warning urging motorists to be vigilant.

A man who sustained serious injuries was admitted to Grey Hospital.

The deceased could not be named yesterday as their next of kin had not yet been informed of their death.

Police spokeswoman Captain Siphokazi Mawisa asked for anyone who might have witnessed the accident to come forward and call 040-659-7080. — zikhonam@dispatch.co.za