Crisis as taps run dry due to drought 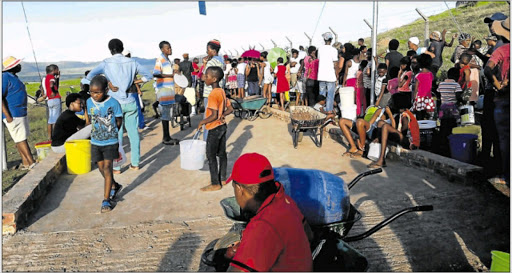 The situation has since worsened.

“We have been reporting the matter to the municipality but they have done nothing to fix the problem,” he said.

“People can’t use their own toilets and have to go to other areas to collect water.”

He said if the municipality cared for the people, they would have supplied them with tanks and give them water.

“The municipality used to deliver water to the community using the 15 Jojo tanks that they supplied for the community. Since November, they have not been bringing water to the township,” said Ilinge resident Fikile Jeku.

DA councillor Sakhumzi Mkhunqe and Unathi Mkefa ward councillor Caesar Gwampi said they had been reporting the water problems to the municipality, with no success.

“Ilinge and Gwatyu are the worst-affected areas as they used to depend on water brought to them by trucks from CHDM.

“Now that they have not been receiving the water, it is difficult for old and sick people to walk long distances to get water,” said Mkhunqe.

CHDM spokesman Lonwabo Kowa said they were still facing a major water crisis and Komani was one of the affected areas.

“We are aware of the constant water outages in Unathi Mkefa where streets closest to the hill are severely affected.

“This is caused by the terrain and the long spell of drought which saw our water sources adversely affected.

“The reservoirs are under a lot of strain as a result the water pressure is too low to provide water to higher lying areas while low-lying areas would somewhat be at the advantage,” he said.

“We have crafted a plan of action in an attempt to mitigate the current challenges experienced across the district. The plan is being implemented to affected areas and will extend to more areas across the district including Ezibeleni.”

He said there were areas without water but the district authority was trying its best to come up with alternative solutions.

“We have noted with concern a myriad of water and sewer related challenges affecting communities in some parts of the district,” said Kowa.