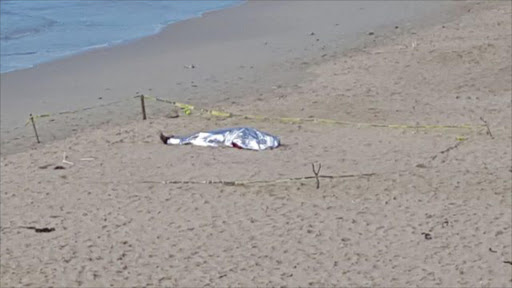 Three men drowned on Sunday morning in Cape Town after a baptism went wrong. Picture: SUPPLIED
Sea rescuers have recovered the bodies of two of the three men who drowned during a church sea baptism at Monwabisi beach in False Bay in the Western Cape on Sunday morning.

The body of the third victim is still missing.

Vaugh Seconds‚ National Sea Rescue Institute station commander at Strandfontein‚ said it was believed the men had been swept out to sea by rip currents.

City of Cape Town law enforcement spokesman Wayne Dyason said that while conducting a baptism‚ two of the church members had got into difficulty in the water.

He said a member of the public had apparently jumped into the water in an attempt to try to rescue them‚ ending in all three men drowning. It is unclear if the third man was a church member.

Seconds said his duty crew had been activated at 8.01am on Sunday morning by the Transnet National Ports Authority (TNPA) following reports from Metro Control (WC Government Health EMS) of a drowning at Monwabisi.

“On arrival on the scene we found one adult male was out of the water and confirmed to be deceased and two adult males remained missing in the surf.

“It appears that the three men may have been swept out to sea by rip currents during a baptism ceremony in the surf‚” Seconds said.

“During an extensive sea and shoreline search a police dive unit located and recovered the body of one of the missing men and Police divers are continuing an ongoing search operation for the remaining missing man‚” he added.

He said the bodies of the two deceased males had been taken into the care of the Forensic Pathology Services.

Dyason said baptisms were common along the False Bay coastline.

“I was in St. James this morning and I saw another baptism being conducted there‚” Dyason said.

“It’s not the first time that people drown during these baptisms.”