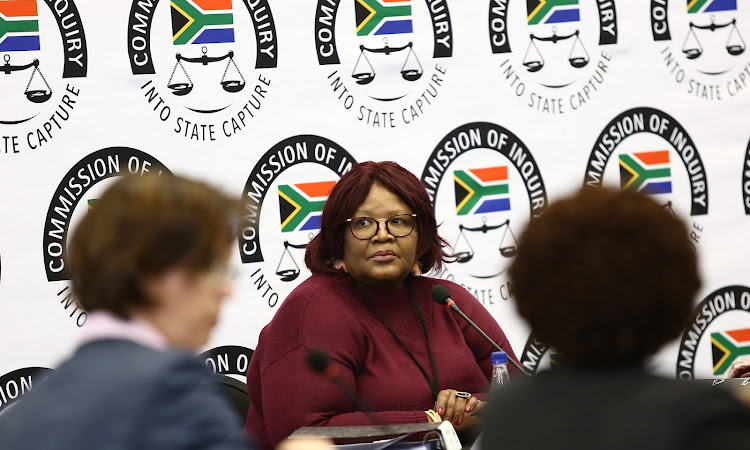 Mentor has given extremely detailed testimony about her engagement with the Gupta brothers.
Image: Masi Losi

Former ANC MP Vytjie Mentor says Ajay Gupta told her that his family were going to be the “main supplier” of uranium to government’s nuclear build programme – and slammed the later abandoned Pebble Bed Modular Reactor for “burning money”.

Mentor was testifying at the inquiry into state capture about a meeting she had with Ajay Guptas at his family’s Saxonwold home in mid September 2010‚ shortly before she was due to meet with then president Jacob Zuma.

“He talked about SAA’s turnaround strategy‚ that it was not working and it is not yielding results‚” she said.

“If I agree to facilitate that SAA doesn’t fly that route (Johannesburg to Mumbai) any more‚ then I could become the Minister of Public Enterprises…I asked him: how so?”

She said Ajay Gupta had then told her that Zuma would reshuffle his Cabinet‚ and that then minister Barbara Hogan would be reshuffled.

“At the time there was no speculation of reshuffle…I asked him how would you do this? He said they could put word in for me with the president. When I looked shocked‚ he said they normally do.”

Mentor said Ajay Gupta told her “they are in partnership with Jet Airways”.

In her testimony‚ Mentor has described how the Gupta brothers were seemingly key players in arranging meetings for Zuma – and themselves claimed to be part of his “advance team” during a 2010 state visit to China.

According to Mentor‚ she had been trying to meet with Zuma about the Pebble Bed Modular Reactor for some time‚ and had been hoping to discuss the project with him.At the time‚ she was the chairperson of Parliament’s Committee on Public Enterprises and was “deeply concerned” about South Africa’s ongoing power outages.

“He referred to [the] nuclear build programme that government was going to embark on…he said they are going to be the main supplier of uranium.”

Mentor has given extremely detailed testimony about her engagement with the Gupta brothers‚ who she says came to fetch her from the airport prior to her scheduled early morning meeting with Zuma.

She was then taken to the Sahara offices‚ where she met with Ajay Gupta.

Mentor testified that Ajay had asked her about her children‚ and what sport her son played. When she revealed that he played cricket‚ he offered to give him a cricket bat and invited her to the Sahara suite at the Newlands cricket stadium.”

She said she declined these offers.

On day 4 of the state capture inquiry hearings on August 27 2018, the commission discussed how the cross-examination of witnesses would work. Karyn Maughan explains.

Vytjie Mentor: Gupta brother pressured me to meet with Zuma in China

Former ANC MP Vytjie Mentor has described how she refused one of the Gupta brother's requests to meet former president Jacob Zuma during a 2010 ...
News
3 years ago

Former ANC MP Vytjie Mentor has described how she refused one of the Gupta brother's requests to meet former president Jacob Zuma during a 2010 ...
News
3 years ago