Chippa deal back in play

BCM to reconsider the R7.2m for six soccer matches relationship 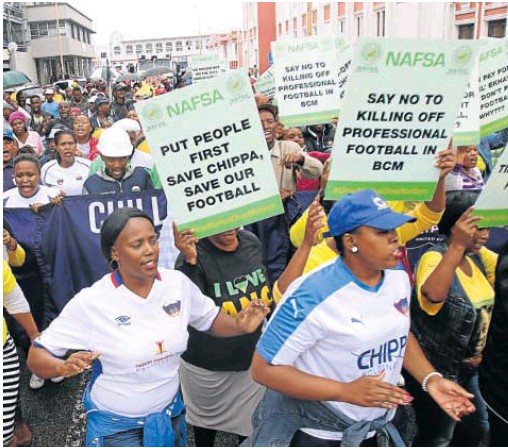 Fans have called on BCM to maintain a relationship with Chippa.
Image: Michael Pinyana

A new report recommending a three-year partnership renewal from this year to 2021, which was seen by the Daily Dispatch, is expected to be tabled at a council meeting on Wednesday.

The report is signed by BCM head of co-operative services, Bob Naidoo, then acting city manager.

Naidoo recommended that: “Council authorises the approval for a new partnership agreement between Buffalo City Metro and Chippa United Football Club for the next three financial years (2018-2019, 2019-2020 and 2020-2021).”

The Daily Dispatch understands that the ANC caucus is in full support of the partnership after the party’s provincial executive committee reportedly told its councillors that they should approve it.

The deal was initially cancelled in October last year when BCM mayor Xola Pakati told councillors that the metro’s relationship with Chippa United was unsustainable.

Pakati had lost control in his caucus when the ANC faction aligned with suspended Dr WB Rubusana secretary Pumlani Mkolo pushed for the city to end its relationship with Siviwe “Chippa” Mpengesi.

If approved, the new proposal will see Chippa walk away with R7.2m for six matches that will be played at Mdantsane’s Sisa Dukashe stadium.

BCM DA caucus leader Terence Fritz said: “It is interesting that this matter has been brought back into council after the mayor last year indicated that the agreement would not be extended due to the unsustainable nature.”